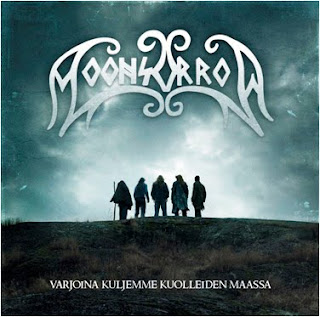 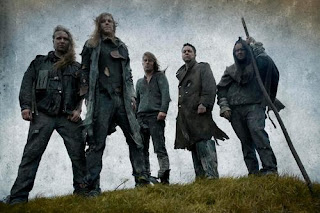 It's been a while since these Finnish prog-metallers put out something new, especially a full-length. Though their last release, 2008's "Tulimyrsky" was over an hour long, it's still considered an EP due to it really only having one new song. This new album has already been receiving massive amounts of praise, and though I'm not the biggest fan of the band, I think it only reinforces the incentive to check it out.
Not that anyone who's listened to any of the band's previous albums should be surprised, but most of the meat of this album are four tracks that all top ten minutes. The signature sound is present with the blending of black metal, folk music, and progressive rock all falling into place. Melodic riffs, epic song structures, powerful vocals, and well crafted song-writing have set this band apart from their piers, and continues to do so on here as well. All of these are trademarks of the band, so long-time fans shouldn't be surprised by these facts either, but the songwriting is what sticks out on here more so than on past releases. Another point I don't think I should have to make is the complex amount of instrumentation on these songs, ranging from electric and acoustic guitars to mouth harps and whistles, all used to great effect throughout the disc.
These songs, despite their length, are really well crafted and contain really great hooks that should stick in your head easily. I found it easier to get into these songs, and keep up with everything, rather than the two twenty-plus minute tracks on "V: Hävitetty." There's something that's striking about each track on here, the more brutal attack of opener Tähdetön, the epic nature of Muinaiset, the more melancholic melodies on Huuto, or the progressive movements of closer Kuolleiden Maa, something sticks out about each one, but I'm sure others would find their own identifiable trait within each track as well. While the tracks themselves are entertaining, I feel like the three interludes provide a short breather in between the epics enough to kind of allow the listener to catch their breath before the next track begins.
Overall, I can't deny the greatness of this album, it's certainly become my favorite of the band's work, and from what I've read, it has for others as well. I'm sure in due time, people will eventually criticize this album for being as great it is, but those that really listen will always know why this one stands out. If you enjoy progressive, folk, or black metal, this album is a must if you haven't heard it already.
Overall Score: 9
Highlights: Muinaiset, Huuto, Kuolleiden Maa
Posted by maskofgojira at 11:58 AM