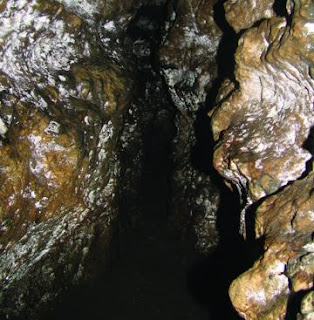 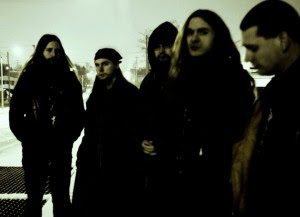 It was only after reading some reviews for this album did I finally decide to check it out, as what I've read has been pretty favorable. Apparently starting out as a one-man band, and then after moving from Minnesota to Wisconsin getting a full line-up. I guess that move can actually attest to waiting close to six years for this album.
I think one of the most accurate statements I had read about this album was that it actually flowed like an album, not a collection of songs. It manages to go through sections where more folk-tinged acoustic parts are used, and then use more brutal black metal riffing at another. There's a solid balance of aggression and precision on here, knowing when to burst out and attack and when to pull back and relent. During those more calm moments on here, the band channel an almost neo-folk sort of vibe as well, hear the instrumental Flicker of The Ardent Light. There's also a good amount of shredding on here as well, but it should be to the point where black metal fans are getting their feather's ruffled about because of it. But I have to say that the biggest pitfall on here are the vocals, which just didn't fit with the music, they were clean, sort of reminiscent of A.A. Nemtheanga of Primordial, but not as psychotic.
The album has a bit more dust to the production than I thought it would, it's a little more raw. What you'll find on here is not modern black metal with high-quality production and shine, this is still pretty dirty compared to what groups like Dimmu Borgir are doing. This sort of production works in the band's favor, while I'll admit that it's a bit rough during the opening tracks, it gets easier to get through, hear Sullen Murmur, Oppressive Stillness for a good example of some of the better sounding parts on the album. In all honesty, some tracks, Sybil being the one that stood out here, could have been taken out, though an interlude is fine, I don't think that that specific track needed to go on for five minutes.
Overall, I found most of this album to be really enjoyable, with some really impressive playing on it. Though it still has it's flaws, it's still very well done and it does have the flow of an album. If you like good musicianship within your black metal, that ventures into some more folky areas as well, check this out.
Overall Score: 8
Highlights: Parting of The Way, Sullen Murmur, Oppressive Stillness, To Glisten In All The Colors of Distress
Posted by maskofgojira at 6:48 AM