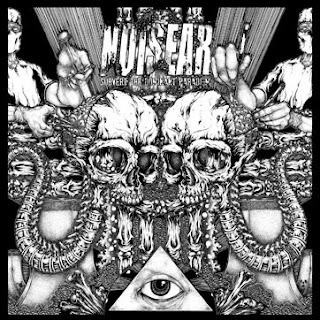 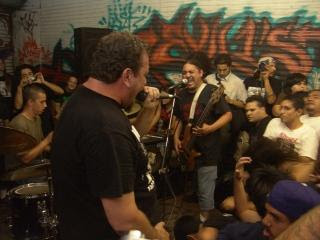 Noisear are a band I found out about through a youtube sample on the Relapse Records page and needless to say that was all it took to get me excited about this release. What I heard really got my blood pumping and made me want to punch a hole in my wall. There was nothing mainstream about what I heard from that one song, and the rest of the album did not disappoint either, with it's other twenty-nine songs.
When listening to this album, you'll get the band's own brand of grindcore, something that mixes the intensity the genre was founded on with the technicality of technical death metal, the spazzy nature of mathcore, and the occasional break into noise, found on album closer Noisearuption. But for almost the entirety of this record, it doesn't slow down for a second, often going at such a breakneck pace it's hard to keep up, plus most of the first twenty-nine songs, of a thirty track album, are all under two minutes. As you can probably imagine from that, what happens in a single song can be a bit hard to grasp at, as things are moving so fast and changing so frequently that it can be a bit difficult to kind of find one thing that just sticks out. The vocal on here vary themselves as well, going from deathcore screams and goregrind gurgles to almost Barney Greenway-esque (Napalm Death) growling.
But what makes this record so different from other grindcore that I've heard, besides the integration of a more technical aspect, is how catchy most of these songs are. A lot of these songs are actually quite catchy, with how spastic most of these songs are, something is bound to stick, like the stop-start riffing in Fraudulent, the weird bending in Inoperative, which actually made me think of Queens of The Stone Age for some reason, or the quasi-thrash of The Last Spark of Resistance. It's quite confounding to me as to how something so fast and crazy as this can be as catchy as it is and have parts that stick in your head. Even the aforementioned noise adventure of Noisearuption, is so odd that it's memorable, with it's brutal noisy drone laying over the top of some weird electronic noises, it just got stuck in my head.
Overall, this is a really good grindcore record, something that's been at a loss, and I'm hoping for change. With how menacing this record is, I'm hopeful that I'll be able to listen to the whole thing over again several more times. If you like spastic grind, definitely check this out.
Overall Score: 8.5
Highlights: Gestapolis, The Rail, Ace Is The King, Four Walls, Noisearuption
Posted by maskofgojira at 11:54 AM