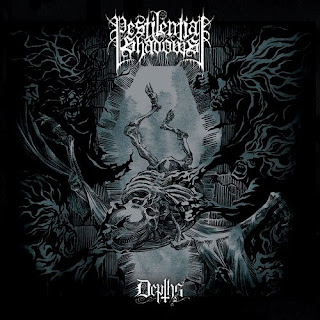 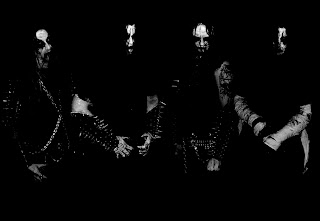 When looking into the Australian black metal scene it becomes apparent that a lot of members are interconnected with various projects. Seeing how members of Pestilential Shadows contains members of heavyweights Naxzul and the prolific project Drowning The Light along with many others, it might appear that an individual sound might be hard to come by. While I'll definitely say that I do back Naxzul, I have never quite found an affinity for Drowning The Light, but this band did manage to draw my attention with their last album.
Pestilential Shadows plays a brand of black metal that while remaining firmly within the old-school realm, is constantly evolving for the better. While I'd never say that this band falls in line with groups like Artefact of Slechtvalk, the sound on this album is very melodic and driving. The addition of both softer and slower passages also does wonders for the band's sound as it definitely increases the intensity of the more aggressive sections while bringing in a more tense atmosphere to a given song, hear Tribulations of Man for example. Even the addition of the slightly cheesy spoken word parts on the album, Choirs Beyond The Blackened Stars, manages to only increase this album's overall effect. There's also a much more epic feeling to this album, with a tracks like Putrid Earth or the title-track, Depths, standing out in that regard with how grandiose they are.
In terms of songwriting, these are definitely well crafted tracks with plenty of replay power, but I would say that the one downfall on here would be the lack of memorability of these songs. While the entire album is certainly an experience, especially when listening from front to back, I wouldn't say that any songs really stayed with me for too long. Though I will say that certain melodies do actually come up after the album closes as they managed to leave, at least it was the case with me, a sort of scar ingrained in me, as these melodies are more haunting rather than catchy, as tracks like Poisoner will attest to.
Overall, this is a really good album and one that should hopefully get the band much more attention. While this album doesn't break the mold of black metal, it is certainly an album with a lot of personality, a nasty one but that's beside the point, that should win over more than a few new listeners. If you like black metal done with just a hint of experimentalism, definitely look into this album.
Overall Score: 9
Highlights: Tribulations of Man, Shrine, Depths
Posted by maskofgojira at 6:37 AM