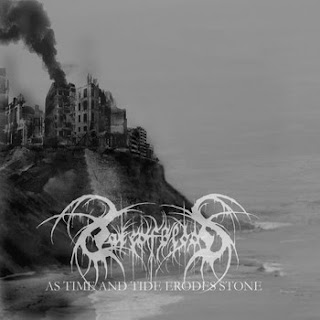 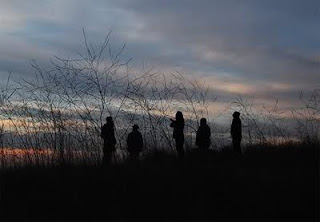 This is really my first encounter with the band named Lake of Blood, though I was familiar with them. I had first heard of them through the split they did with Kentucky based Panopticon, and though I paid little attention to that split, I had heard good things about it. For some reason or another, I've seen them being put along side with bands that have been put into the Cascadian black metal scene, which I don't really understand.
From that split, the band had three tracks around five minutes, two years later, on this full-length, the band has written two tracks that both top ten minutes. Like I said, I can't comment on the sound of the band from the split, but this album definitely contains some more doomy and tribal elements. There's a very strong sense of adventure within each of these tracks, both in terms of structures, and lengths, and actual instrumentation. The acoustic guitars used in the first track Proxigean Arcanum should give a clean indication as to the type of band this is, or it should clear up any sort of misconceptions people might have about this band being a straightforward melodic black metal band. There's also quite a sense of epicness to this album, in both songs being able to capture a more grandiose sound without sounding pristine, and the build up within Destroyer of Vices only reiterates that point.
However, there is still a very prominent black metal core to the band, as seen with their more extreme sections. The more aggressive points on here do have that melodic black metal sound that one might expect, as well as the inclusions of the occasional solo. Though I would say that this album really removes the band from most of the stereotypes one might associate with this genre anyway, so most of the similarities are limited.
Overall, this is a great album and one that I didn't really have a ton of expectations from coming into. Though I really loved this album, I do fear that going back in their catalog might not present me with the same feeling I got from this album. But if you like epic sounding, somewhat progressive, blackened doom metal, definitely check this album out.
Overall Score: 9
Highlights: Destroyer of Vices
Posted by maskofgojira at 11:08 AM