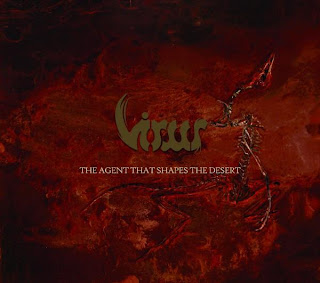 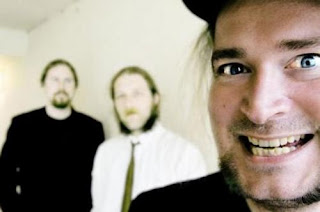 Anyone that knows about the outer extremities in black metal's history knows about the sole "official" album from experimentalists Ved Buens Ende. The "Written In Waters" album changed the game of black metal, forever demonstrating some of the most left-field influences to ever be brought into the genre. A long while after that album was first released, two-thirds of that band created a new place to play some of the weirdest rock/metal out there called Virus, this is that band's third full-length.
I'll get my biggest gripe with this album out of the way first. From what I understood, there was supposed to be a Walker Brothers cover on here, Shutout to be precise, and that track is not on here, and being the fan of Scott Walker that I am, I am sorely disappointed with that. But onto what's really on here, it's essentially what Virus was on their last album, weird, forward thinking, and not willing to compromise. The dissonant guitar lines, jazzy bass-lines, and intricate drumming coupled with some Czral's left-field crooning. I think it's only fair warning for those that haven't heard these guys before, the distortion on this record isn't really that found within metal very often, but something, I hear, more commonly within garage rock or more retro bands.
When it comes to performances on here, they're all top notch, especially the bass work, which really blows me away. Bjeima just keeps this record together in my opinion, when it comes to the aforementioned dissonant guitar work and intricate drumming, with bass playing that both acts as the glue keeping the two together as well as the knife cutting out enough room between everything allowing everything to stand out. When it comes to the drumming though, Esso's playing ranges from almost simplistic and danceable on Chromium Sun to sparse and quite jazzy on Where The Flame Resides. Czral's guitar work is solid as well, providing a great amount of avant-garde-ness to the band's overall sound with riffs that sound like they were pulled straight out the the 60s and 70s, and then chopped up to sound as dissonant and weird as possible, but still sounding melodic. Hints of jazz, garage rock/60's rock style, and even bits of surf rock came up throughout the record, for my ears anyway.
Overall, I have to say that I liked this album quite a bit, it was more than just an entertaining album. There's quite a bit of replay power to this disc, though not as good as their last one, this is still solid. I'd recommend this to anyone that wants to hear something a little out there.
Overall Score: 8
Highlights: The Agent That Shapes The Desert, Red Desert Sands, Call of The Tuskers
Posted by maskofgojira at 11:04 AM