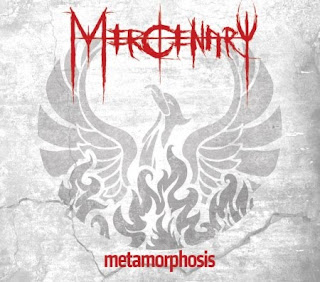 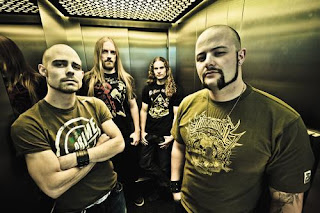 Mercenary, a band that has been ignored in my eyes for far too long. I first heard of these guys through their 2006 masterpiece "The Hours That Remain," an album that is still my favorite. But back in 2009, the band went through a major line-up shift, where drummer Mike Park Nielsen, keyboardist Morten Sandager, and lead/clean vocalist Mikkel Sandager all left the band, reducing the band now to a four piece.
While I originally found the band when I was going through a big melodic death metal phase, these guys struck the right chord with me, mixing melodic death metal, power metal, and a bit of progressive metal all into a very unique sound. Even though I found them great, I soon realized that they didn't really get the press they really needed to come overseas it seemed like with every album they made, they kept improving and getting even more unique, writing better songs, sounding better as a whole. Although the loss of a drummer and keyboardist ultimately doesn't impact the band's sound, the loss of a vocalist does, and to me that's the biggest difference between the band's last four albums and this new one. While bassist/vocalist René Pedersen is certainly well versed in both screaming and singing, opener Through The Eyes of The Dead certainly proves to recall the band's sound from previous albums, his voice just doesn't reach that certain peak that Sandager's could. Instrumentally, the band is at the top of their game though, so there's really no complaint on my part when it comes to that.
I'll come out and say that the band's last two outings, 2006's "The Hours That Remain" and it's follow-up 2008's "Architect of Lies," were great albums all the way through that managed to be engaging, catchy, and fluid sounding, in my eyes they were some of the best melo-death albums to be released in recent years, this album does not follow that trend unfortunately. While some tracks, Memoria or Shades of Gray, definitely have great hooks and musicianship, other tracks just don't stick as easy, In A River of Madness. In my opinion, and I know a lot of people will disagree, but I don't think the songwriting is on par with previous albums.
Overall, this is a decent album with some strong playing but lackluster songwriting. For me, this doesn't top the last two albums and just falls short. If you're a fan of the band you're probably curious to hear this if you haven't already, but be prepared that you might be disappointed.
Overall Score: 7
Highlights: Through The Eyes of The Dead, Memoria, The Black Brigade
Posted by maskofgojira at 7:44 AM