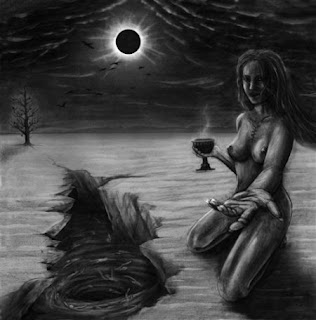 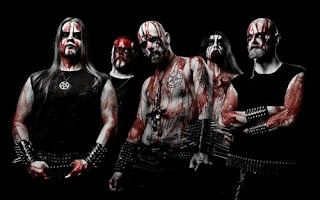 It's been a while since I listened to Alghazanth honestly, I remember a few years ago when I think I had all their albums, listened to one after another and found myself constantly amazed with their sound. Years pass and I guess I grew up and kind of left them behind, cause I haven't really listened to them since then. From what I remember about their albums was a strong sense of songwriting and catchy melodies, I'm hopeful this new album might keep with the feeling that originally made me really like this band.
Musically, this is a fairly straightforward melodic/symphonic black metal record, it doesn't really divert from that sound too often. The riffing is very melodic and memorable, the vocals are tuneful, of at least as tuneful as screaming can be, and the keyboards provided what's to be expected from them, an atmospheric backdrop to the rest of the band. Apparently this album is the band's return to their roots, which means making use of less busy songs, but I think that that might have been what attracted me to the band in the first place, as several of these songs were just kind of there for me, it wasn't bad by any means, but they weren't that great either, hear opener A Living Grave. I just couldn't find something that really got me going or really stuck in my head after a song finished for some reason.
When the band indulge in a little bit more of a mellow interlude in a given song, it usually works in their favor, in my opinion, as tracks like Only The Reflection Bleeds or For Thirteen Moons, which mellow out and make use of piano and acoustic guitars end up being tracks that don't feel as long as others. Even the symphonic parts, when they move up in the mix, aren't that bad, and actually add a cool dynamic to the band. I found these two aspects of the band to really being this album's saving grace, as the rest just didn't amaze me like I wanted it to, especially in the latter track mentioned above, where there's an more gothic, not bad gothic, sound that really had this really great vibe which made it stick out.
Overall, this album is decent, it's alright, but I'm pretty indifferent to it. I'll have to go back and listen to the band's older material to try and see if I find something in there that made me find them so great before. If you like symphonic or melodic black metal, I'd recommend this to you even though it's not really my thing.
Overall Score: 6
Highlights: With A Thorn In Our Hearts, Under The Arrow Star, For Thirteen Moons
Posted by maskofgojira at 9:59 AM