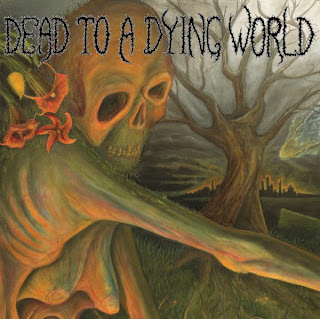 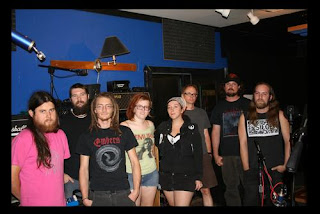 When it comes to the style of crust punk being mixed with black and sludge metal, I often find myself, more often than not, enjoying those bands. When I first heard of this collective, I thought no different, though from seeing the song lengths on this debut, I was a bit hesitant. As a new group there's always going to be a bit of hesitation on any listener's part about whether or not they'll end up liking a certain album, and this was a album that definitely did that to me.
This album is a staggering three song long debut, with two of the tracks trumping ten minutes. Opener Concrete and Steel really showcases the depth to this collective, making use of not only the traditional guitar, bass, and drums, but also cello and up-right bass. I found the use of these additional instruments to really be the band's trump card as it added a very unique sound to this album that other groups don't seem to have. Having said that, I found that the first two tracks didn't really capture my full attention like the last song did, but with each listen it grows on me more and more, so this is a grower.
Throughout the record, the collective manage to make use of both soft and more melancholic sections where more often than not, the cello will take the lead, while the heavier part definitely recall both the band's more doom and black metal roots, with the cello still retaining a good portion of the overall sound. Now while the longer tracks do build up and fall down, Stagnation keeps things on a more metal note, being more crusty and blackened than the other two tracks for it's entire duration. Vocals are fairly standard, with the main vocalist providing low and harsh death metal growls and yells, while the cellist provides the higher shrieks, giving the album another sort of variation. However, and this might be obvious, but the highlight of the entire record is the twenty-two minute closer, We Enter The Circle At Night... and Are Consumed By Fire, which takes the band's sound every which way, making use of sludge, crust punk, black metal, progressive rock, among a bit of more classical cello playing as well.
Overall, I'd say that this album is really solid, but like I said, it's a grower. It will definitely require patience from those who listen to it, as with any band that performs long songs. If you like experimental sludge or black metal, this is a band you should check out.
Overall Score: 8
Highlights: We Enter The Circle At Night... and Are Consumed By Fire
Posted by maskofgojira at 5:20 AM