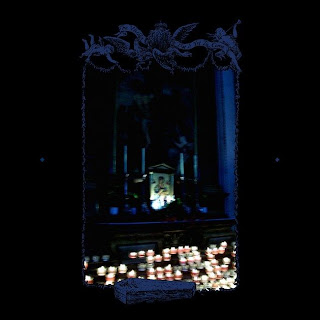 Until I read a rather positive comment about this new Negative Plane album, I was unaware that this band even existed, let alone put out an album five years ago. This, the duo's second full-length, was apparently in the making for some time, though it's quality over quantity in this case, one release after five years that can easily trump numerous group's two or three releases in that time span is certainly worth the wait. I would give caution to those that don't like longer albums, as this album is over an hour and most of the songs on it are over seven minutes.
This is black metal that's done uniquely but still in an underground kvlt way. This is raw and very atmospheric, but it's technical, or progressive, sounding in that the riffs are very odd sounding and aren't the regular tremolo picked style. It's not really melodic in a mainstream sense either, as it makes sense, there are riffs that are used over, but it's not in a way that could be considered "hooky," more like they are haunting. I, personally, really enjoyed the guitar tone on here, as the cleans were very spacey and psychedelic sounding, hear Angels Veiled of Bone. The echoes that come from the guitars add a unique and very psychedelic atmosphere on here that really just entranced me.
While the songs, as I previously stated, are long, they do cover a lot of ground within each song. A track like The One and The Mary, to me, sounded like a regular black metal song for the most part, but the middle of the song just goes into this weird proggy part that just blew my brain onto the wall. I think however that it's the atmosphere on each track that managed to draw me into this album so much; each track just had such a unique background behind it that it was really something special. For me, I found the entire record to be shrouded in this cloud of darkness, I know it's cliche to say that, but it just feels so desolate and empty. Even when leads were being played, specifically in The Number of The Word, I still found the atmosphere drawing me towards that instead, which isn't a bad thing to me, it's probably going to be different for everyone.
Overall, I really enjoyed this album and I'd have to recommend this to anyone looking for some unique black metal. The sounds on this album are very traditional, but sound so fresh and psychedelic on here. If you want an experience from your black metal, definitely look into getting this record.
Overall Score: 8.5
Highlights: Angels Veils of Bone, All Souls, Stained Glass Revelations
Posted by maskofgojira at 7:01 AM