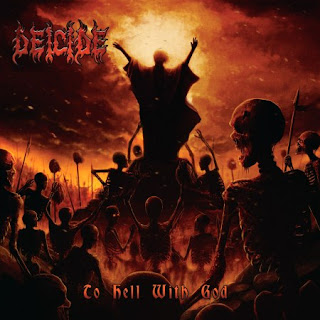 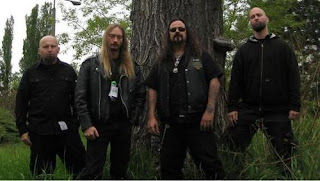 It's been a long time since I listened to a Deicide album to be honest. I found their last album, 2008's "Till Death Due Us Part," to be one of their weaker albums, but had heard good things about this one, as well as the first track that I had heard was actually pretty good. Apparently a return to form, or at least a return to their Satanic leanings of old.
This album just screams death metal, there are no breakdowns, no pig-squeals, and no hardcore dances can be done to this, this is the brutality that the old-school brings. Sure, this album sounds up to date production wise, but musically, it's very old-school Deicide sounding. The guitar playing on here is just fantastic, compliments to Jack Owen and Ralph Santolla, as the playing on here is just stellar. The riffs on here recall a more trashy vibe than on the last few releases, hear tracks like Witness of Death or Angels of Hell. Drummer, Steve Asheim is great as always, blasting like no other while still providing a great backbone for move groovy moments. But of course we can't forget frontman Glen Benton whose growling is ferocious and original sounding, even at this point in the death metal game, no one else sounds like him; and he's as blasphemous as ever as well.
The songwriting on here is top notch as well, having some of the band's best songs in a long while, in my opinion. Tracks like Empowered By Blasphemy are just extremely catchy, really fast and brutal, but also still true to everything that is Deicide. Honestly, I've read this and I can agree with it, this is the album that should have followed up 2006's "The Stench of Redemption." This album just exudes the presence of what Deicide is.
Overall, this is a great album full of really blasphemous, Satan hailing, death metal. This is the level I hold this band to be accountable at, nothing but the highest caliber of death metal. If you like old-school death metal with a modern production, definitely check this out.
Overall Score: 8.5
Highlights: To Hell With God, Hang In Agony Until You're Dead, How Can You Call Yourself A God
Posted by maskofgojira at 12:39 PM