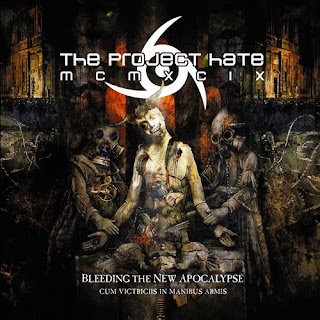 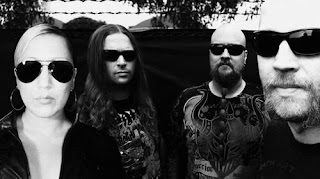 Having been active for just over a decade, it's a bit mysterious as to why Project Hate haven't gotten that big. They've released some of the best, and most original sounding, death metal in that decade plus, as well as gotten numerous high profiles guests to come on their records, including Magus Caligula (ex-Dark Funeral) and L.G. Petrov (Entombed). Most of their records have been mixed and mastered by Dan Swanö, so it escapes me as to why I haven't really heard a lot more about this group.
This, the band's eighth full-length, is the first to feature new female vocalist Ruby Roque, whose style is a lot more excitable and, in my opinion, a bit more operatic than the last female vocalist, Jonna Enckell. However the two main composers still remain, Jörgen Sandström (vocals) still does menacing growls while Lord K (guitar, keys, bass, back-up vocals) manages to create epic death metal songs that cross genres and still provide catchy riffs and solos. All six of these songs top eight minutes, with four of them topping ten, just in case you were wondering how epic some of these tracks got.
Sonically, I don't think there's a lot on here that differs too much from the project's last album or two, except the new vocalist that is. Essentially, you have the epic songs that mix together elements of death metal, black metal, symphonic metal, and electronic music. While the above doesn't really tease you to give this any more thought than any of the band's other albums, it's hard, in my opinion, to really call this or any of their albums bad, they're just progressive death metal of a high caliber so if one sounds like the last, it's only because they're all good albums. While tracks like Summoning Majestic War or Bring Forth Purgatory stick out for how epic and grandiose they sound, a track like A Revelation of Desecrated Heavens is just really catchy. The composition of each of these tracks is top notch, as always, so there isn't really anything to complain about.
Overall, another solid release from this great band, definitely one of the most original death metal bands of the last decade. Once again, though this doesn't differ too much from their last album, it's still very good. If you like experimental death metal, this is for you.
Overall Score: 8.5
Highlights: They Shall All Be Witness, The Serpent Crowing Ritual
Posted by maskofgojira at 12:57 PM