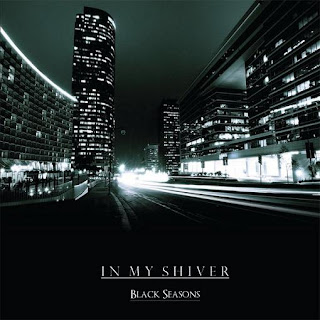 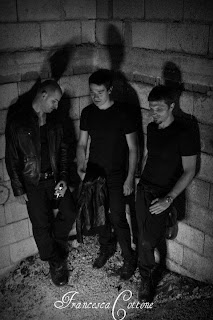 
With every year I find myself exploring the depressive metal scene, the more I find myself disillusioned with how a lot of new groups/projects present themselves. A lot of groups end up sounding so much like each other, whether that's a product of having similar influences or not remains to be seen, but there are still those few groups/projects that stand out and manage to pull off something a bit different. This group titled In My Shiver caught my attention with their unique cover art, which looked strangely more modern and actually quite dark in comparison to the covers a lot of depressive groups use, the whole slit wrists and hangings are getting a bit tiresome.
While it was the cover that drew me in, it was the music that made me stay. The songs on this album are not the same monotonous, droning clean chords and messy distorted riffs that dominate most of these bands, instead this record had a lot of dynamics and a much cleaner production. There's a lot more riffing on this album compared to their piers, almost to the point where this could be considered to be a melodic black metal record, though saying that would make it one of the better records I've heard from that sub-genre as well, hear a track like Around The Sadness. Now, while all the above is probably making you wonder what exactly does make this a "depressive" band, well that comes in it's use of atmospheres, which are very bleak and solemn, hear The Hills of Hate for example. Another link to that other scene are the melodies used on here, they have that sort of post-punk/shoegaze kind of vibe, but are clearly not a band that tries to say "Look at us, we can play blackgaze and sound like we're crying when we sing!" no, these guys never go that route.
Like I said before, the production on here is a lot cleaner than on other records from bands within the depressive scene. The distorted guitars are heavy but not grating on the ears, sounding like a normal, modern black metal tone. The bass is nice and bouncy, coming up through the mix enough to stand out, but not enough to be overwhelming, listen to the basslines on Dawn of The Chaos. There's a nice balance between being heavy and melodic on here, as well as having a clear sound and being aggressive.
Overall, I'd have to say that this is a really solid record with a lot of positives and not a lot of negatives. This definitely stands out among the other band's that these guys are lumped along with and will probably be cast off from that scene because of it. If you like black metal that has a lot of melody without sounding cheesy or going into blackgaze territory, than this is an album to check out.
Overall Score: 8
Highlights: Night Feelings, The Cold Depths, Promise Your End
Posted by maskofgojira at 12:48 PM