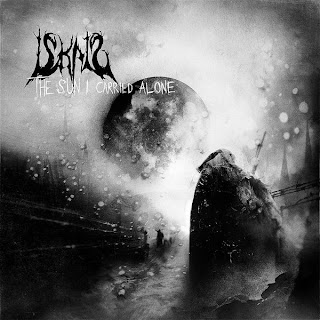 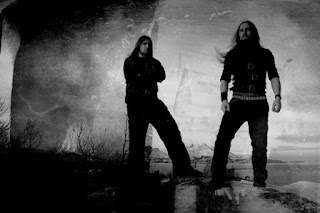 It's only been within the last year that I heard the Norwegian duo Iskald's work. I found their 2008 album, "Revelations of Reckoning Day," to demonstrate a fine line between melodic songwriting and progressive black metal riffs while retaining a pretty solid and identifiable sound. This new album expands upon the style present on that album and pushes it into an even more original form.
Make no mistake however, the band are still making use of the two identifiable features I mentioned above, these songs just have a more adventurous sense of experimentation within them. Riffs on this album are even more progressive sounding, hear a track like Natt Utover Havet, but are even more catchy than before; but along with that, these songs don't feel as aggressive or angry as previous albums. I could see the replacement of a more direct and brutal assault for more expansive songs that build and fall more upsetting some, but this band has only improved upon their previous formulas. Album closer, and epic, Burning Bridges is by far the most expansive piece the band has ever written, moving into newer territory by including even more progressive elements into their sound. However, a song like I Lys Av Mørket definitely retains a sort of blackened thrash approach that should definitely fit well with the fans of their older material.
The production on here is also a strong point of this album, it's clean, maybe a little too polished for this style, but it works for the modern approach this band has used. It's not overly atmospheric or distorted sounding, preferring for a more pristine sound that enhances the songwriting and riffing more than atmosphere. While most of the time I found this cleanliness to enhance the album, there are some moments where I think that the record could have done with a little bit of a more rough sound, the shortest track Rigor Mortis for example I think would have sounded better if the record was more crusty sounding.
Overall, this is a really good record that I could definitely see bringing new people into the band. While I'll say that this is not the most original sounding record, it does have a strong sense of self and some really great songs. Definitely look into this band, and this record, if you like melodic black metal that isn't as "cheesy" as some other groups.
Overall Score: 9
Highlights: Forged By Wolves, The Sun I Carried Alone, Burning Bridges
Posted by maskofgojira at 12:18 PM