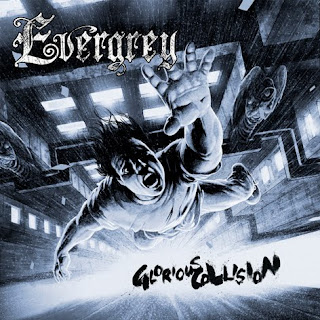 Unlike some of their piers from Gothenburg, In Flames and Dark Tranquillity, Evergrey never got the attention over in the US they probably deserved. As a result the band is pretty much Europe exclusive and while their albums manage to cross overseas due to a loyal following, I realize that the chances of seeing them live aren't that great. This, the band's eighth album follows a drastic line-up shift, leaving only frontman Tom Englund and keyboardist Rickard Zander the remaining members of the band's most praised line-up.
For those of you who have been living under a rock and are not familiar with Evergrey, you've been missing out, with releases such as 2003's "Recreation Day" or it's follow-up, 2004's "The Inner Circle" showcasing the band as a driving force behind modern prog-metal. Despite that tag though, Evergrey aren't the type of band to write long, drawn out songs that showcase a lot of soloing and technicality, instead focusing on superior songwriting and melodic hooks. While recent albums haven't quite been up to the high standard set by those two albums, this new album, with a brand new line-up, is set to be one of their best from what I've read so far.
Musically, I can't really say that this album differs too much from the band's formula, but that's not to say that this is a bad album or even mediocre, I'd say it's one of their best in a while. The overall sound on here is not as heavy as some of the band's older material, instead having a much more atmospheric vibe to it, which actually makes it sound a lot more stark and dark sounding, hear tracks like You or Out of Reach. However, despite this album not being as heavy as previous albums, doesn't mean it isn't heavy at all, tracks like Restoring The Loss and showcase some great heavy riffs. However, the band still use ballads on here, my favorite being the very mournful The Phantom Letters, which really hits home for me, but Free could be considered the real ballad of the album since it doesn't feature any metal or rock elements to turn it into a power ballad. Englund, as always, is a fantastic singer and one that really deserves a lot more credit than he's gotten for being able to sound like a hard-rock singer from the 80s but still sounding modern and youthful, hear the first single Wrong. I'd say that this album has some of the band's catchiest songs in a long time on here.
Overall, I'd say this is a really good album, full of great songs that should definitely please long time fans of the band. While it is a bit different from the band's older material, the more atmospheric sound on here definitely suits them well. If you like prog metal that's a little more song oriented, I'd recommend this highly to you.
Overall Score: 9
Highlights: Frozen, The Phantom Letters, I'm Drowning Alone
Posted by maskofgojira at 11:29 AM