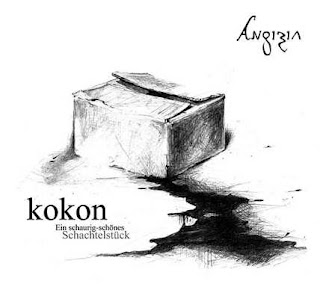 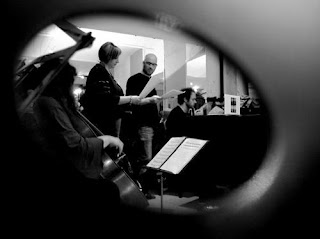 Over the years since it's inception, Angizia has been a band that, to me, has constantly been overlooked within the avant-garde metal world. Taking just as much from polka, jazz, and classical music as it does from any sort of metal, if not more, I rarely see any sort of press for this project. Having been labeled "circus metal" by some fans, I would think that more people would have become more aware by now.
While the project's last couple of albums haven't really wowed me, they still sound like no one else. Offering up a unique sense of drama and classical orchestration that has rarely been matched by others, Angizia continue on their more recent trend of having albums filled with more story-esque song sequences. Combining a very operatic, or cinematic, sort of orchestration style with very avant-garde tendencies often lands the band into territories no metal fan would go near, like the third track, Ein Quäntchen Gift, which makes use of that cinematic orchestration but also mixes it with black metal vocals and more polka and rock stylings, it's done well, but that doesn't make it any less weird. Now, while tracks like Sack Und Asche remain on the more symphonic side, a track like Maß Für Maß manages to be one of the few times the band actually ventures into metal. But while about half of these tracks, there are sixteen all together, are short minute long pieces that, while they might fit into a complete puzzle, feel a bit short and end up doing little to entertain.
For those wondering, the metal in this band is very limited, as the band make use of violins, cellos, and piano more often than electric guitar, which is a nice change of pace for someone that is always listening to metal. The vocals are pretty varied as well, making use of the aforementioned black metal screams, operatic female singing, extreme metal howls, and spoken word, sometimes all within the same track. While I would say this album is definitely much more classical, I personally enjoyed when the band went into something a bit different, like the heavy strumming of the acoustic guitar in Ich or the piano solo on Aus Traum Und Tanz. Ein Walzer. that really stuck out.
Overall, this is a decent album, but by no means my personal favorite, I'm always hoping for something a bit more metal. This is definitely not going to appeal to people that like their music heavy, aggressive, and brutal, as it's pretty much the exact opposite of that. If you want your music weird, eccentric, and more adventurous than this is a record and band I would recommend to you.
Overall Score: 7.5
Highlights: Es Ist Leidenschaft., Sack Und Asche, Maß Für Maß
Posted by maskofgojira at 7:22 AM