Nekrasov - In Solitude and Darkness, The Final Step Is Taken (2011) 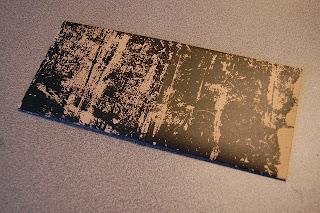 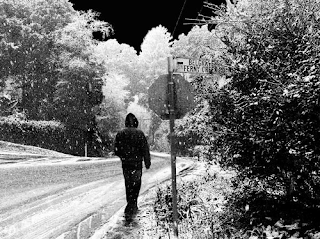 After a pretty solid year of releasing a handful of new releases to the underground, Nekrasov has returned with what I've heard is his only planned release for this year. Blurring the lines between obscurity and total isolationist is what I've seen this project doing with sole member Bob Nekrasov putting out some of the most ear piercing music I've ever heard. Those who've seen my top fifty albums of 2010 might remember that his album "Cognition of Splendid Oblivion" even made it on due to how additively brutal it was.
First off, I'd like to say that I consider myself lucky to have gotten one of the 40 copies of this album that were made. But musically, this is a single, hour and eight minutes long track of blistering blackened noise. Nekrasov's music has often been described as void metal or abyssal noise, and I think that describes the sound of this album perfectly, it's brutal, uncaring, and indifferent to everything else out there. I remember playing this album while my mother was home and having her describe it as the sound of someone putting a microphone into the propeller of an airplane and recording it, which is a fairly acute first impression, as this album is the sound of the spiralling of void.
But behind all that hatred and noise lies a much more ambient and quiet sense of melancholy. Throughout the whole track, while noise dominated the foreground, a dark ambient mood persisted in the background. It was this quiet background that pulled me in and allowed me to open myself up to be entranced by this album. Around the half-way mark of this album, I found myself starting to pick up melodies or riffs, whether they're actually there or not remains to be seen, and they were actually pretty memorable, nothing super technical, but pretty straightforward melodies. Another tag that's often been associated with Nekrasov's sound is that of industrial black metal, which I can see how it comes into people's heads when listening to his older work, but on here, rarely appearing until the closing minutes of the album.
Overall, this is one hell of an album, it's unrelenting in how it just dominates over a listener and refuses to let them breathe. This is non-metal music done with a metal mentality, so I don't think a lot of mainstream metal fans will be getting into this. But if you like your music as unapologetic and aggressive while being experimental as well, this is an album I'd suggest you try and get while you still can.
Overall Score: 9
Highlights: There's Only One Track
Posted by maskofgojira at 12:43 PM