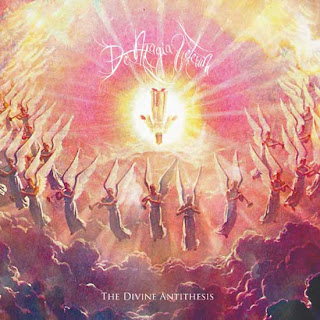 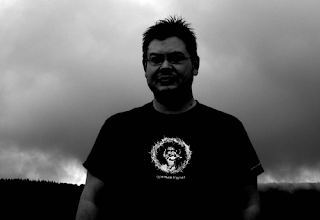 For those unaware of the stir in the underground that's been cause over the past few years by solo musician Mories' illustrious project Gnaw Their Tongues, this album will probably shock you. Due to the sheer amount of publicity that I've seen GTT getting from magazines like Decibel or Terrorizer, his output under that moniker has steadily become more and more recognized. While I don't think it would be an understatement to say that GTT is Mories' main project, he has also made room for his blackened noise project Aderlating as well as this one.
I don't think it would be an understatement to say that while DMV is a project who's output is not as vast as Aderlating or GTT, I think it is a bit more consistent. The time between releases is more steady, with one, maybe two at most, releases coming out a year, while his other projects may have anywhere from about five upwards. But release wise, there's always a similar theme of harsh, noisy sounding music that seems to permeate most of Mories' musical output, and this album is no different. This is a very rough sounding record, something that I'm sure might turn some people off, but the rawness does have it's advantages, as it does make this record sound so much more savage, listen to how much it adds to a track like Torn Between Ruins, Faith, and The Divine for example.
When it comes to DMV, there is a much more metal aesthetic to it, as riffs are more tangible, vocals are not as far back in the mix, and there isn't as much a focus on otherworldly forms of horror tactics. However, that doesn't mean that this isn't weird and disturbing, as the frequent shifts on a track like The Stench of Burning Wings were quite unsettling to say the least. A lot of what's on here is quite disorienting and to an extent progressive at the same time. Everything is always changing, blazing black metal riffs will slow into funeral doom and then burst into an almost grindcore like part within several seconds of each other. In some spots, The Flaming Sword, this album will probably loose a lot of listeners simply due to how defiant it is to conform to any one style or sound.
Overall, I'd have to say that I really enjoyed this album, it's quite a challenging listen, I can only imagine what first time listeners to Mories' work would think of this. It is certainly one of my favorite releases Mories has released in a little while, if you look up his output with GTT you'll understand why I say a little while. If you like aggressive, progressive, and noisy sounding black metal, definitely check this album out.
Overall Score: 8.5
Highlights: Transfiguration, The Heavens, Burning Hands and A Crown of Flames
Posted by maskofgojira at 9:36 AM