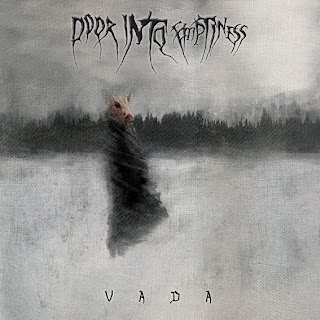 It's become increasingly difficult to expect unique sounding music from smaller countries of the world when it comes to black metal. Belarus is a country that never really appears in my head when I'm thinking of bands that are breaking new ground for the genre, not to say there aren't good bands there. When I stumbled across this album, I found the cover striking enough to give it a shot, having almost no idea what it could be, as the term black metal nowadays is a fairly ambiguous term to say the least.
After the intro title-track, Vada, this, I don't know if it's a band or a project, album moves into what could only be described as a mix of atmospheric black metal, a bit of doom metal, and hints of industrial punk being thrown at a wall and seeing what sticks. There's actually a lot of diversity on here, songs can range from slower and more ambient tracks, Last Hunting, to more aggressive and almost death metal, Uel or SS 18, something that I surely didn't expect. But despite that fact, the production shifts on a few tracks, making it seem as if several of these tracks were recorded at different times, this most noticeably happens on Aujom.
Despite any and all musical shifts that occur throughout this album though, an ever present atmospheric sound always remains. This atmosphere tends to give the music a very cold and more mystic, if you will, feeling that sits better with the slower tracks than the faster ones, as one might imagine. The aforementioned Last Hunting providing the focal point for this atmosphere to control an entire song, remaining very minimal, with repetitious guitar lines behind walls of cold keyboards and wailing screams and soft whispers.
Overall, this is a decent album that holds quite a bit of variety that should please fans that want a little more of that in their black metal. With the ever present atmosphere on here, I don't think one track ever become so different that it made it sound like a different band, despite the production shifts. If you like atmospheric black metal that takes a bit more pleasure in doing more adventurous styles, check this out.
Overall Score: 7
Highlights: Uel, Last Hunting, Vavorok
Posted by maskofgojira at 12:52 PM