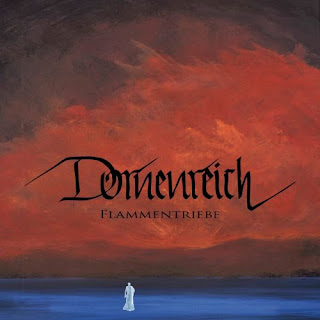 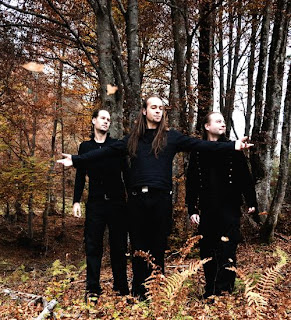 Dornenreich is a band I've kind of developed and love/hate relationship with throughout my listenings with them. While their early albums are definitely some well crafted melodic black metal recordings, their more recent work has moved them much farther into the ambient rock genre, something I always associated with groups like Katatonia and Anathema. Their more recent work was decent enough, but not really anything that managed to really keep my attention for too long.
This new album has gotten quite a bit of hype from the underground community, some praising it as one of their best works. From the opening title-track, Flammentriebe, this album already shows that it will not be like the last album's more recent material, which for me treaded the fine line between being pure atmospheric folk influenced rock and the black metal stylings of their early material. This album proves to be a much more extreme venture, taking hints from their older material, and maybe from tour mates Agalloch, to include a bit more variety within their sound.
While I would say that this album certainly is more of a black metal record than the last few have been, there is still the presence of a more atmospheric and folk influences. Tracks like Tief Im Land or Fährte Der Nacht make use of the violin and melodic riffs to create a very organic and almost spiritual atmosphere surrounding them. It's in these sort of tracks where I believe the band could further expand their sound and explore, territories that made me think of bands like Agalloch or Opeth, and at times even Enslaved. During the softer and more acoustic parts of this album, I actually found them to really be more pleasing, as they didn't dominate the record, I found that I was able to appreciate their use a bit better, hear closer Erst Deine Träne Löscht Den Brand for example.
Overall, I'd say this is a really solid record, but one that I found was maybe just lacking that special something for me, or might require a few more listens. I definitely liked this more than the band's more recent work, but not as much as their earlier stuff. If you like progressive, atmospheric black metal, I'd say you should check this out.
Overall Score: 8.5
Highlights: Der Wunde Trieb, Wolfpuls, In Allem Weben
Posted by maskofgojira at 7:14 AM