Diocletian - War of All Against All 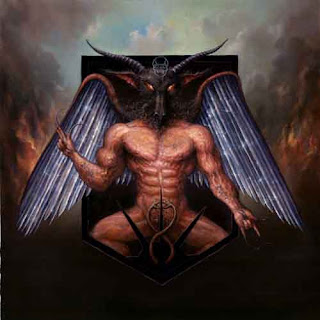 From The Depths of The Extreme.

Diocletian is a blackened death metal group from New Zealand. The band released their debut full-length last year and this album has garnered some praise from more underground media, which is how I discovered them. This will have been my first encounter with the group so I can't say how this album will compare to previous material.
This is an album that sounds live, straight from the opening riff on Black Dominion. There's a lot of reverb on the entire record, making it sound very cavernous and filled with echoes that only serve to increase the intensity of each track. There's also a use of feedback during these tracks, especially the slower ones, hear Death Tyrant, but is also evident in the "transitioning" between each song and build-ups as well. The production does have it's flaws however, for how raw and live this thing sounds, it is also quite muddy sounding, blending the guitars, bass, and some of the drums together into this odd bassy mess of distortion that kind of just irritated me.
Another thing to bring up is the song lengths, until the final track, the epic sixteen minute closer, Fortress of The Inconquerable, the longest of these songs is just over four minutes. Due to the muddiness of the production, some of these songs end up sounding similar to each other, luckily the song lengths make it so that doesn't become that big of a problem in the end. Tracks kind of move from style to style, including the above genres of death, black, doom, and a bit of thrash as well, while rarely ever giving you a chance to breathe, which can grow tiresome if you want something a bit more diverse.
The epic track, mentioned above, in fact is the one track that doesn't really sound like the rest of the album, for me, the only REAL stand-out moment. This track was so monolithic and heavy and slow, not funeral doom style, but the reverb and echoes just helped to make this track sound massive. The production on this track also sounds a bit cleaner and clearer compared to the rest of the album as well, allowing things to just come out and be heard much easier. This track also manages to shift around into a few varying degrees of sounds, from a more brutally heavy and slow section to a more noisy ambient one, including a few different things along the way as well.
Overall, this record was quite entertaining, if not a bit muddy. While I think that this record certainly deserves praises, and it has, this isn't really something that I found myself totally immersed in, but that's just me. If you enjoy some gritty extreme metal from down-under, this should be something you want to hear right away.
Overall Score: 7
Highlights: All Against All, Nuclear Vomited, Fortress of The Inconquerable
Posted by maskofgojira at 12:18 PM