The Last Days - When The Tomorrow Is A Grey Day EP 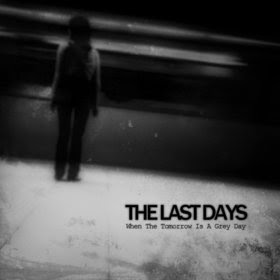 We Are Sad People.

The Last Days are a post-rock/depressive black metal group from Mexico. This EP is their debut release onto the scene and has turned a few heads to their direction for their intriguing mix of the genres above. Not knowing a lot about the Mexican black metal scene, or metal scene in general, I am curious as to how this sounds.
Starting with some low-key guitar chords being played alongside some background noise, this record is a modern representation of depression in the city. This opening track, the title-track, When The Tomorrow Is A Grey Day, acts as little more than an introductory soundscape that should draw the listener inwards. The bulk of the album's material is the three tracks in the middle of this release, with all three tracks clocking in at around nine minutes.
The sound of these tracks is quite different than how a depressive black metal project usually sounds, and this is a positive. Instead of buzzing, distorted guitars taking the front of a song, they instead fall into the background while clean melodic guitars swirl around and around the listener's ears. I can't really say that these tracks really provide anything new for the post-rock influenced black metal scene, but I'd definitely say these guys are closer to post-rock then any sort of metal with this release anyway, which works in their benefit. Vocals also don't play that big a role in this band either, only appearing on the track Soul of City.
Overall, this is a solid debut from a band that has potential. I think the fact that they lean towards post-rock more than black metal, while still having both contained within their sound gives them a bit of an edge on bands that take black metal over post-rock, but that's just me. If you like either of the genres mentioned above, definitely check this one out.
Overall Score: 6.5
Highlights: The Time Will Never Come Back, A Vague Look
Posted by maskofgojira at 11:55 AM