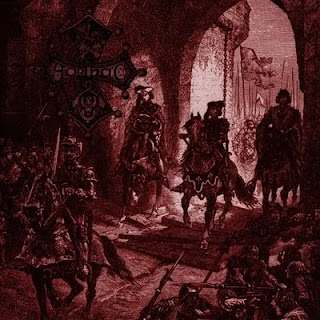 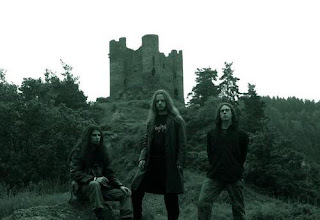 The Sound Of Welkin Anthems At Dusk.

Aorlhac is a melodic black metal trio from France. This is their third full-length release, after having gained a bit more notoriety through tribute compilations for bands like Emperor and Ulver having been placed under their belts. Having formed in 2007, the band have released an album each year since 2008, this one being no exception.
After the short introduction, the trio takes off and immediately pounds you with their tremolo picking assault, a sound that is found throughout most of the record as well. Being somewhat familiar with the band's older material, I can say that this album is certainly a step forward, it no longer blazes forward without breathing or having moments to build back up, on the opening track onward the inclusion of more acoustic guitars really does help to make these songs more entertaining. Though their inclusion is used sparingly, it is used effectively in making most of these songs feel like more than just blazing black metal.
I found that while this album never really slows down to allow you to catch your breath all that often, their melodies are clear and distinguishable to where they are enough to hold your attention even while everything else is just flying by. But saying that ultimately brings up the band's most obvious flaw, a lot of these songs are interchangeable with one another. Though there are certain tracks on here, Sant Flor, La Cité Des Vents, that do stand out, most of these songs aren't all that different from one another, especially the first half of the record, this is where most of the songs that sound the same are placed.
With all that said, there are touches of other styles at work in here as well, most notably symphonic, but not in the Emperor or Dimmu Borgir way. Though the sound of this group is very similar to the first Emperor albums, excluding the keyboards, with a very cold and blazing sound, the symphonic elements in here have a bit more of an avant-garde touch to them, utilizing a violin at the beginning of Vers Les Honneurs. It's not so much of an atmosphere thing as much as a diversity thing, where you could draw a comparison more towards a band like Ulver than Emperor in the way they use these other instruments.
Overall, this is a decent album, not really anything mindblowingly unique or different, but it's solid. It might not be my personal cup of tea but those that enjoy more fast paced black metal, in the vein of the early 90's bands would probably enjoy this much more than I did. If you like melodic black metal with a bit of a symphonic edge, check this out.
Overall Score: 6
Highlights: Plérion, Sant Flor, La Cité Des Vents, La Comptine Du Drac
Posted by maskofgojira at 11:04 PM