Circle of Animals - Destroy The Light 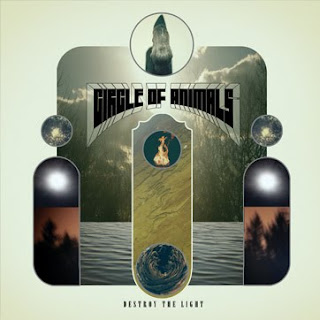 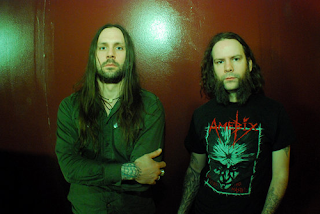 And Now For A Resident's View of Chicago.

Circle of Animals is an industrial/psychedelic rock duo from Illinois. The project was created and consists of Sanford Parker (Minsk, Buried At Sea) and Bruce Lamont (Yakuza) and a rotating circle of drummers. After releasing a 12' single earlier this year, they decided to put out their debut full-length as well, coming out on Relapse Records.
Speaking for myself, not knowing a lot about Chicago's industrial music scene, or industrial music in general, I can't say how true this record is to that. What I found on here though is close enough to the artists that I do know from that scene for me to recognize that this is definitely what it claims to be, industrial music with a focus on driving beats and hypnotic repetition. The music on here definitely makes me think the late 80s and early 90s industrial groups, that I know, through their use of almost machine-like drumming and slow patterns presented by the guitars, bass, and keyboards. There are several times where the music broke out of being industrial based and utilized some elements of post-punk, psychedelic rock, and even freak folk music, hear All Spirit/No Mind.
Sanford's production, as always, is stellar in making the music sound good while keeping it authentic and real sounding. The production on here compliments the sounds of industrial music on here, keeping it very mechanical and robotic most of the time. The production, to my ears anyway, kind of made this album feel like an early 90's industrial record rather then a 2010 industrial record, which is not that bad a thing, but just something that struck me.
Overall, not being the biggest fan of this style of music, I can't really comment too heavily on it, but I found a good portion of this record to be quite interesting and entertaining. While I can't see myself really putting this on repeat over and over, though in the end I probably will anyway, this is definitely a duo who I would like to hear more from. If you like industrial or post-punk stuff, I don't see any reason why you shouldn't check these guys out.
Overall Score: 7
Highlights: No Faith, ...And Together We Are Forever, Destroy The Light
Posted by maskofgojira at 1:18 PM