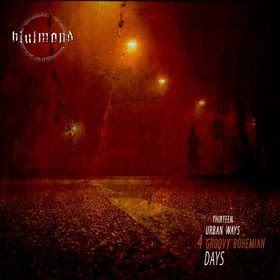 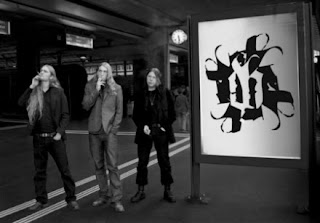 Blutmond is a "black metal" band from Switzerland. This is their second full-length album and following a straightforward, to me, black metal release, this comes out. Having no prior contact beyond seeing the album title and listening to a song from their first album, once, I had no idea what to expect.
Starting off, the reason the above term "black metal" is used in quotations should be obvious to anyone looking at that album title. The thirteen tracks on this album are more in common with groups like Arcturus, Vulture Industries, and Solefald than groups like Archgoat or Gorgoroth, but there's plenty of middle ground. When talking black metal, purists won't think of this, but I don't think that fans of prog and avant-garde will think of this when thinking of groups similar to the former above either.
This album walks a very fine line between the previous black metal sound of their debut and avant-garde progressive tendencies of more modern groups. Honestly, these songs don't so much have their own style as the bands above do, but seem to take the Mike Patton road by just hopping from one genre to the next, even though that black core still remains, hear the opening song You vs. The Modern Lifestyle Obsession. There are more than a few parts on this album where the band cross into jazz, while riffs then selves can sound like anything from thrash to blues, Rebellion.
When this band sound their best is actually when they are doing more abstract sounding things in their music, like when it's a laid-back jazz section or a more industrial part. Though it seems like certain tracks are more entertaining than others, the band certainly do have a handle on taking more abstract riffs and patterns and fusing them together with more straight ahead black metal. But like mentioned above, the band still have their black metal roots and there are several tracks on here where the band still rip out some more aggressive black metal, Blind Date Broadway or Good Morning World. While I personally find these tracks to be less entertaining, they are certainly not adventurous, often infusing elements of death and thrash metal into otherwise normal sounding tremolo picking.
For a black metal record, even one as avant-garde as this one is, this album is still not original enough, for me, to excuse it's over an hour length. I found a few moments in the middle of the album that were just lackluster and dragged on a bit too long for my own personal taste. Having said that if maybe two or three middle tracks were taken out, this would certainly be a great record, since the opening few and closing few tracks of the album are just great material.
Overall, a promising record from a promising band, and while there were a few moments that did not hold my attention, this is a solid release. I can't say that this will be the avant-garde record for this year, for me at least, but it is still very good. If you like avant-garde groups like those mentioned above, definitely check this album out, it's right up your alley.
Overall Score: 8
Highlights: Working Poor, Yuppie Yeah! (A/A 3000), Friday - Trapped In Mental Disorder, Suburbs - A Lamentation Or A Social Frustration!?
Posted by maskofgojira at 5:21 PM