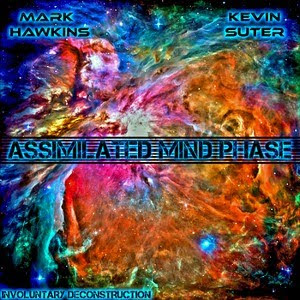 Groove Out With Your Sister Too.

Assimilated Mind Phase is a collaboration project between tech-metal guitarists Kevin Suter and Mark Hawkins. Kevin Suter has released numerous singles, a full-length and an EP this year alone, while Mark Hawkins is currently working on his debut full-length. This is the duo's first collaboration together under this name, and have already released another single at the time this review is coming out.
Personally, to start off, I've only listened to Suter's material so I can only compare it to his and the samples of what I've heard from Hawkins, but this album certainly appears to blend their sounds together. As this is a guitar oriented album, the focus is on that more so than on anything else, just to point out. Both players have about an equal share in the sound, you have the groovy djent riffs from Suter's work while you have the more technical and progressive leads from Hawkins, being demonstrated in the opener Journey Beyond Oneself. While I can't say that the two together really create as unique a sound as they do apart, their sound is a nice take on what could essentially be described as a technical/progressive death metal album.
It might seem a bit odd how Suter's solo work can range into six and seven minute territory, yet only of song on here extends past three minutes, I'm not including the six minute electronic closer, Involuntary Deconstruction. I can understand since this is an EP, but I would have enjoyed the duo making some longer and more elaborate pieces. However thanks to short tracks, and essentially the shortness of this EP, things don't drag on as they could have, as this is really, in all honesty, a shred album.
Overall, this is a fairly decent debut, if not a bit one-dimensional at times, but still quite good. This style isn't really something that regular people will probably get into, the whole instrumental shred stuff is a bit boring after a while. But if you like either of the guitarists performing, or if you're just a fan of progressive or technical metal, check this out.
Overall Score: 7
Highlights: Perilous Void, Robotocization
Posted by maskofgojira at 11:02 AM