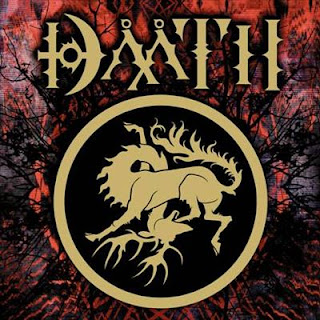 DÅÅTH is an experimental death metal group from Georgia. The band have steadily been increasing in stature thanks to some high-profile tours with bands like Cynic, Goatwhore, and Unearth. This is their fourth full-length and the second to feature lead vocalist Sean Z.
Opening up with Genocidal Maniac, the album then bursts into it's intense one-two combo of Destruction/Restoration and Indestructible Overdose. These two songs are not only the shortest on the entire record but also some of the most intense songs, never stopping or giving you a break by going all melodic. The latter track contains an almost black metal vibe to it while the former has a more typical sound for the band, with a few grinding parts included as well.
Sean Z, and really all the vocalists that DÅÅTH has used, in my opinion, are my kind of death metal vocalist. Though be biased in my liking of his style, I have to say that there is quite a bit of variation on the album vocally, as well as musically, while retaining a death metal style. Throughout the record you'll hear brutal death metal grunts, black metal screams, and his usual shout, all of which are amazing, but then again, I'm partial to them.
Onto the music on here now, this is easily the most diverse and eclectic record the band has produced yet. There are elements of other styles of metal, from black metal, in the track mentioned above, groove, Manufactured Insomnia, prog, Oxygen Burn, and even other styles including fusion, psychedelic music, and even bits of industrial. Both guitarists, Eyal Levi and Emil Werstler craft uniquely technical riffs that are both brutal and head-scratching, hear Exit Plan. Besides that, this album sounds extremely epic in comparison to their past releases, with guitars that sound gigantic, bombastic drumming, by none other than Kevin Talley, and heavy grooving bass, performed by Jeremy Creamer. Honestly though, after listening to this record, personally, I just needed a break, as this thing is relentlessly intense from start to finish.
In interviews leading up to the album, Levi had stated that this album was recorded using only natural guitar tones and that gives the album a more raw feel, something that is more comparable to other releases from the band, as it's not as raw as other bands. But that's all a matter of opinion because, as stated above, this album sounds massive and really doesn't really lend itself to being under-produced. But I can see where more real sounding parts are used on here, whether it's the obvious use of feedback or just a less mechanical sound in the guitars.
Overall, this is a really good record that's just filled with great riffs, aggressive vocals, and just massive sounding. While some fans may be dismayed at the lack of "experimental" tendencies present on this record, this is easily the most angry record the band has produced yet. If you like extreme metal with a foot in other experimental music genres, you should definitely check this out.
Overall Score: 8
Highlights: Double Tap Suicide, Arch (Enemy) Misanthrope, N.A.T.G.O.D.
Posted by maskofgojira at 10:03 AM