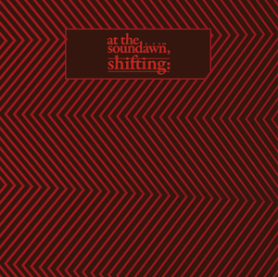 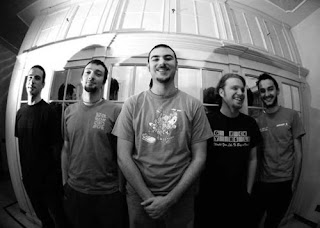 To The Science Wing!

At The Soundawn is a post-metal/experimental rock group from Italy. This release was released several months ago, but I only recently discovered it through a recommendation from a friend and have since checked it out. This album has gained a decent amount of praise from the sludge/post-metal scene due to the experimental routes taken on this, their sophomore, release.
This record starts off by immediately trying to distance itself from others that are labeled as post-metal by using a simple idea that just stands out, that one idea is making the guitar melodies more upbeat. This opening track, Mudra: In Acceptance and Regret, is a nice started to this album as it showcases this band's adventurous spirit by mixing in several different music ideas together. Beginning rather heavy and pretty average on a musical front, the band then moves into a post-rock type of thing, making use of clean vocals, before adding in saxophone that just glides over the top of the whole band when they go into a jazzy section.
This opening song kind of sets the tone for the entire record, whether you like it or not, because this is a post-metal album, but in every song there's a part that just sticks out as being different. More often than not the band use soft, atmospheric, and at times jazzy, sections to counter their more aggressive metal tendencies, as upbeat as those moments are anyway, just hear Caofedian. I actually found these softer sections to be more intriguing, as well as entertaining, than the heavier ones, I really thought that the band did an excellent job at creating spacey atmospheres while not ever doing all that much. Tracks like Drifting Lights and Hades do a nearly perfect job at keeping a very experimental sound while making the band sound like no one else.
Setting aside all the above, the band still know how to write some catchy parts, Black Waves in particular. This song really captures both the mellow and the heavy, the catchy and the aggressive, the beauty and the ugly sides of the band, the hook near the end of the song really just grabbed me the first time I heard it and it didn't let me go. I'll admit that not every track on here has a big hook, but that doesn't detract away from the impact that most of these songs have. I have to say that while the clean vocals on here aren't particularly metal sounding, having more in common with post-hardcore styled vocals, they actually make the band a bit different and add a certain catchiness to the vocals that probably wouldn't have been there otherwise.
Overall, I can certainly see why this album has received the praises that it has gotten now that I've listened to it. This is certainly a band that is willing to take chances and experiment with their sound while knowing how to not stray too far away from their core. If you like progressive rock, post-metal, experimental music, I'd suggest you check this out.
Overall Score: 8.5
Highlights: Mudra: In Acceptance and Regret, Black Waves, Prometheus Bring Us The Fire
Posted by maskofgojira at 7:29 AM