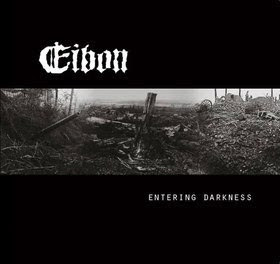 Hammer Smashed Face.
Eibon is a death/doom band from France. This band was formed by ex-members of a doom metal band called Horrors of The Black Museum, and the members decided to take a more aggressive sound and integrate with their more traditional doom metal sound. Following a debut EP back in 2008, this is their first full-length album.
This is a heavy record, just to inform those what they're getting into right off the bat. This band is slow, taking elements of death, doom, and sludge metal together will give you, or at least it should in my head, a dirty and morbid sound. For me, this record isn't as dirty as I would have liked it to be, but it's morbidly slow and monstrously heavy with tons of distortion and feedback.
The ten-ton hammer that this album's sound is actually doesn't take away from any melody and psychedelic elements that weave their way into the songs to be honest. The production on here is just clean enough to make all the elements in the band's sound come through, but unfortunately wipes away a lot of the dirt that would have me ready to punch through a wall, but then again, this is more doom than sludge anyway. Back onto the music, the guitars, surprisingly not only add that distinct doom style of crushing chords but also more often then in other bands, even ones from this genre, have some black metal riffs coming in and out of the sound as well. Not only do these breaks into black metal work in integrating more melody into a given song, but it also spices it up from becoming too monotonous in the doom genre, hear the longest track on the album Substance.
In tracks like Convulse to Reign come off a lot more psychedelic than other tracks through use of more progressive song structures and adventurous effects placed within the songs. When the band decide to go post-metal and move into softer realms of sound, it doesn't come off as just another post-group coping Isis or Neurosis, it sounds like Eibon. This is totally something that I find lacking in many other doom metal bands that try to branch out into post-metal, or bands that start there from the beginning, is that they don't have a grasp on their own sound yet and end up sounding like rip-offs, this is not the case on here.
Overall, this is a very above-par doom metal release with toes in several other genres, hopefully to see more experimentation with in future releases. This is definitely an album I see myself returning to more often than other doom releases this year for some reason. If you like slow, heavy, and crushing metal, check this out for sure.
Overall Score: 8.5
Highlights: Through The Eyes, Substance, These Chains
Posted by maskofgojira at 7:35 AM