Svarti Loghin - Drifting Through The Void 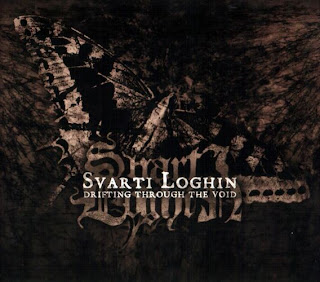 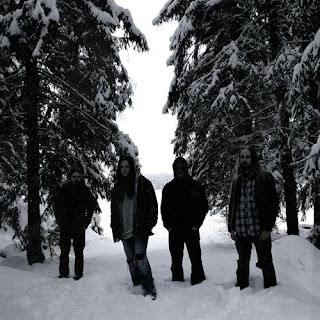 Drifting Is The Key Word.

Svarti Loghin is a post-black metal band from Sweden. This is their second release and one that has garnered them quite a bit of attention from the black metal underground. I've had this album on my plate for a while and I'm finally getting around to reviewing it.
This album has made quite a splash in the black metal community from what I've read about it, with many saying that it is one of the few bands that pulls off the post-black/blackgaze sound originally. Instead of taking a more Neige-styled approach, I found this record to have something completely it's own while still having similar characteristics with the genres that Neige utilizes. I have to admit that I made a mistake in not listening to this album before now, as it ultimately did end up surprising me.
On to the sound itself, the mix of black metal, atmospheric and melodic for the most part, and shoegaze and post-punk music isn't an original idea anymore, but the amount of the ingredients within this group is what makes them stand out from their piers. Kosmik Tomhet doesn't really cross the line into black metal except for the occasional shrieked vocal, choosing to remain in almost The Cure-like territory; a this really carries throughout most of the record as well. There is also a section on the title-track, Drifting Through The Void, where the band actually move into an almost country sound. This is not a record you'll want to listen to if you want to headbang and throw horns to, it'd be more likely that you could dance to this album.
This is also an album that goes by pretty quickly while your listening to it, I know I say that a lot, but there really wasn't a moment on this record where I thought to myself that things were getting boring or repetitive. The band manage to go through several different styles while keeping a core black sound within the songs which kept things from becoming too similar as well. I can't say that every experiment was a success, but more often than not I felt that the band pulled off what they were going for splendidly, hear the blues-based track Planet Caravan.
Overall, this is a very solid record with not much to really complain about. While I wouldn't put this in the same sort of league as Neige's stuff, it's still one of the most original groups doing this style. If you're into the whole post-black/blackgaze scene, since this came out a while ago, you probably already have this in your collection, but if you haven't heard it yet, check it out.
Overall Score: 8
Highlights: Odelagd Framtid, Bury My Heart In These Starlit Waters, Stargazer
Posted by maskofgojira at 2:39 PM