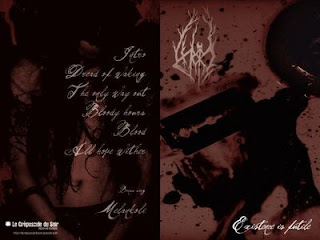 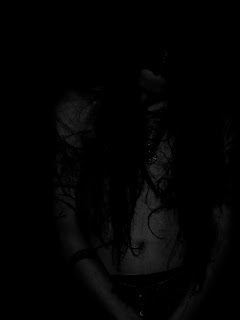 Let's Calm Down, No More Wrist Slashing On This Cover.

Grotte is a Spanish depressive black metal project founded by Nargassh. This album is somewhat a compilation, as it is essentially his 2008 album, under the same name, with a track from a 2009 demo title Melankoli. Nargassh has recently decided to end the project and thus making this his last release.
Let's make it clear that this is the first time I have ever actually heard a Grotte song, let alone album, though I have seen the cover for the original release of this album, and find it to be one of the darkest covers that the genre has ever released. Saying that, the music on here doesn't astound me nearly as much as the covers have, though there is something there. After a rather boring intro track, the album gets off to a rather usual start, with buzzing guitars, slow-paced drumming, no bass (or audible bass), and shrieked vocals, not giving the best impression.
The thing I have to give to this project is that for how similar it is to others in the genre, at least the songs made don't drag on into forever, most tracks are barely even five minutes long. While there is still monotonous playing and rather uninspired, the shear darkness that this recording contains is enough to keep a listener tuned in at least. Though most of the tracks are rather uninteresting with very little actually happening, the production on here is enough to at least make them listenable. Songs rarely break out into an interesting section that captured my attention and made me want to put this on for repeated listens, while tracks like Blood and Melankoli did intrigue me a bit, they didn't really have anything that stood out and grabbed me.
Overall, this is about as generic an album to come from this scene as I've heard, rather uninspired and it's just there. Fans of the genre will probably hate on me, but this isn't an album that really makes me want to check out the other releases that were put out, this doesn't have anything that I couldn't get from another band really. If you're into this style of music, you might want to check this out, but I'd suggest going for something else.
Overall Score: 2.5
Highlights: The Only Way Out, Blood
Posted by maskofgojira at 11:10 AM