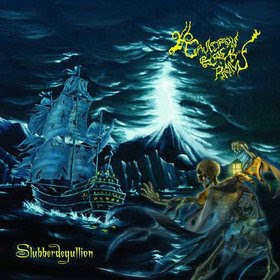 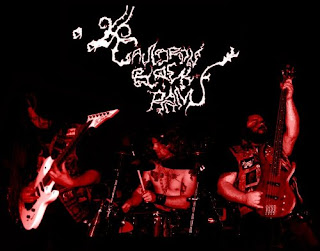 Cauldron Black Ram is a blackened death/doom metal band from Australia. This is their second record, following up their acclaimed 2004 debut, "Skulduggery." This is a supergroup of sorts, the trio being comprised of members from Portal, Mournful Congregation, and Order of The Buzzard.
This is not a record if you want something that sounds modern in any way, this is primal, dirty death metal. The production on here keeps things sounding live and in the moment, while retaining a certain quality to keep everything from sounding like mud. But obviously this is a death metal record so things are kept in a very traditional sort of fashion by playing things pretty simplistically, not too technical, not too melodic, not too fast.
But musically speaking anyway, death metal here is definitely the core sound, but besides that, you can definitely hear influences from groups like Autopsy, Incantation, early Paradise Lost, and even a bit of Entombed as well, so this is pretty doomy as well. Most songs, hear Blunderbuss, are slow and dire-esque. Having said that, this band is also a bit more quirky than your average death metal band, period, by making use of odd riff patterns, strange samples, and weird lyrical topics of pirates and the ocean, not your typical death/doom record. When you get to the vocals, fortunately, or unfortunately for those that don't like this, I found a good amount of the vocals indecipherable within the first few listens of the album.
Those that have short attention spans will probably find this a bit more to their liking due to songs being fairly short, tracks like Seadog Assassins and Black Douglass don't even cross the two minute mark. This album, all together is just over thirty-five minutes, so if you're not into long albums, this should be fine for you. This should also quell any reason to not listen to this record at least once, in your car isn't asking too much, as it won't take up that much of your life if you don't like it.
Overall, this is not my favorite death metal record of the year, but it is by no means a bad one in any way. The production does do this band justice by making it feel more live and in front of you, something a lot of modern bands don't seem to do. Those that enjoy old-school death/doom should find this a welcome addition to their collection.
Overall Score: 7
Highlights: Black Market Trade of Whore and Blade, Satanic Whores In Bestial Brothels, The Cave
Posted by maskofgojira at 10:14 PM