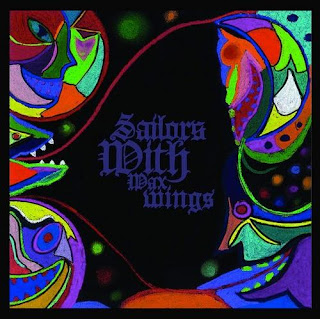 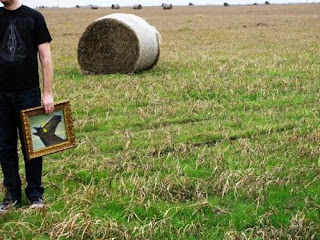 He Went From The Ground Up.

Sailors With Wax Wings is the project of Pyramid's mastermind R. Loren. The project was formed after an experience Loren had while reading poetry by Stephen Crane. This debut album came from what he imagined would suit his poetry as well as the experience.
Being up front I've never listened to Pyramids before, though I've found their artwork to be intriguing, I've never given the band a chance, my bad. I also knew relatively nothing about that band or this one even being related to it until I read an interview with Decibel magazine. Having found their album interestingly described both there and on various sites, this was my experience with this debut album.
Having never heard Pyramids I can't really say if this compares to what that band does closely or not, but the opening track, Soft Gardens Near The Sun, Keep Your Distant Beauty on this album certainly reflects a very sombre, ambient-like sort of vibe more then anything rock or metal. The rest of the album continues in a similar way, making use of slow tempos with minimalistic, and at times almost tribal, sounding drums. While guitars sometimes move into a more mid-paced sections, the rest of the instruments, including vocals, never move past their more ambient states. The ambient state of which I'm referring to is where most of the album lies involves what I consider to be the closest thing to shoegaze or dream-pop coming from a post-rock/ambient music that I've heard all year.
This brings up my next topic for the album, whether intended or not, this album flows wonderfully, each track just ebbing into the next. I don't think one track really stood out that disrupted the flow of the album, as most tracks are very ethereal and dream-like it can be a bit difficult to pull one track from another, but that often happens in albums like this. I think that a lot of people might be turned off by the lack of heaviness, or distortion in general, of this album, but the track There Was One Who Sought A New Road brings an almost black metal sound to most of the track.
Overall, from an album that I knew absolutely nothing about when I got it, this thing has completely blown me away. I've not heard something this ethereal, yet captivating for a long time. I can't say that this would be for everyone, since it rarely gets even close to heavy, but for those that want something a little different, definitely check this out.
Overall Score: 8.5
Highlights: There Came A Drooping Maid With Violets, God Fashoned The Ship of The World Carefully, Strange That I Should Have Grown So Suddenly Blind
Posted by maskofgojira at 4:38 AM