Fukpig - Belief Is The Death of Intelligence 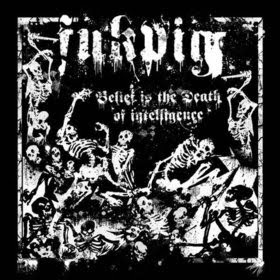 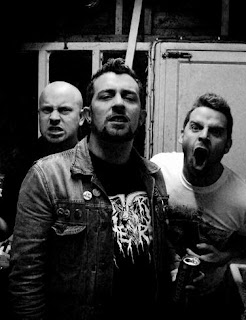 Fukpig is a grindcore/d-beat group from the UK. The trio features members of Anaal Nathrakh, Mistress, and Exploder and is really an expulsion of all things crusty and fast. This is their second album, following up the debut that was released last year.
Taking elements from groups like Extreme Noise Terror and early Napalm Death, then injecting them with a bit of Bathory blackness is what you'll find on here. Songs are fast and intense, rarely lasting more than three minutes, they just blast you then leave. You don't have to worry about not getting your extreme fix when listening to this.
When it comes to how this sort of music is presented, the fifteen tracks on this album anyway, let's just say that guitarist/drummer Mick Kenney knows how to write this stuff. Being one of the leading members, and principal writer, for Anaal Nathrakh, gives him credibility, to those that know his work, due to his ability to write this style of music well and make it catchy. Despite being essentially a grindcore album, there are elements of melody, present in guitar harmonies, Britians Got Fucking Aids and Necessary Heresies, sludge, Mind Attack, and even hardcore, Sadism In The Name of God, throughout this entire record. There are also a fair amount of solos on here as well, for those that enjoy that sort of thing anyway.
Overall, I don't think this is anything that will surprise anyone, it's pretty to the point and direct. Nothing original or unique, but Kenney's one of the leading minds in writing grindcore, to me anyway, and is able to craft songs well enough to keep them catchy while maintaining a sense of violence and aggression. If you like fast, intense, grindcore/punk music, definitely get this to your ears as soon as possible.
Overall Score: 7.5
Highlights: Necessary Heresies, Belief Is The Death of Intelligence, This Is England
Posted by maskofgojira at 11:33 AM