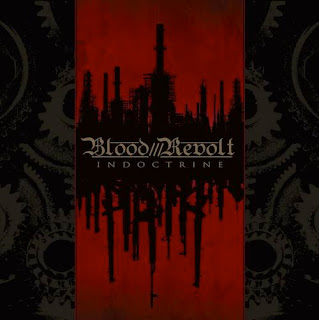 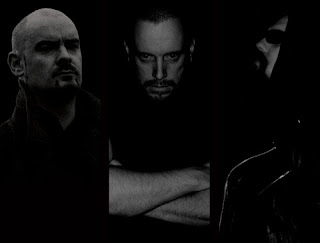 Just When You Thought You Could Go Outside.

Blood Revolt is the Canadian/Irish blackened death metal super-group formed this year. This is the debut album from the trio featuring members of Primordial and Axis of Advance fusing their own brand of extreme metal and conceptual ideas into one. This album was released by none other than the fabulous Profound Lore Records earlier this year.
The trio that comprise this group includes Alan Nemtheanga (Primordial) on vocals, C. Ross (Axis of Advance, Revenge) on guitar, and James Read (Axis of Advance, Revenge) on drums. From what I've learned about this album, there is no bass guitar, thus, the very raw attack of Read and Ross is unleashed without any sort of connecting tissue, excuse the metaphor, to hold them together. The concept laid out on this album is, in short, about a man that lives on the outer edge of society, living as a beast, and killing the people at random. For those that have a weak constitution, I would advise to maybe listen to some tracks online before buying/downloading this.
Musically, this is just a brutal assault upon your eardrums. Elements of black metal, death metal, grindcore, and a bit of sludge/doom in there as well, each track pretty much just grabs you by the neck and pulls you in. Once again, with no bass in here, the guitars and drums can pretty much just go crazy punch you in the face over and over without really restraining themselves to stick to a groove or specific style, hear a track like God's Executioner, Praise Be. There aren't a lot of times on here where the band slow things down, but when they do, it comes to a crawl, My Name In Blood Across The Sky, a song that has exquisite drumming, from the more simplistic placings of the blasts to the fills that inhabit the latter portion of the track.
Vocally, though I've never been all that interested in Primordial, I found the vocal performance on here to be very unique. Nemtheanga is just a beast on here, going all out, you can really feel the emotion he puts into his vocals, everything from his over-dramatic croons to brutally intense black metal screams, it feels natural and is one of the few times I can safely say that a vocalist has personified the character he is singing about. Near the edge of a mental breakdown, rage pulsing through his veins, I felt all sorts of emotions flowing through the vocals on here.
Overall, this is an intense and brutal metal record that is hard to top when your not sticking to just a single style like grindcore. Easily one of the best, and darkest, concepts I've heard in a while, even if you're not into the music, at least read the lyrics, it's really cool. If you like extreme metal that holds nothing back, check this out for sure.
Overall Score: 8
Highlights: Bite The Hand, Purge The Flesh, My Name In Blood Across The Sky, The Martyrs Brigade
Posted by maskofgojira at 6:47 PM