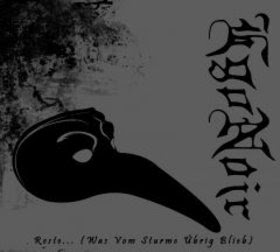 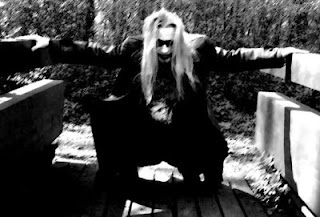 This Is What It Sounds Like When You Play In Hell.

EgoNoir is a black metal duo from Germany. The duo present include JanuZ and Lethargie, formerly of black metal legends Nagelfar and most recently Simple ExistenZ, and this is their second full-length together. The duo have put out recordings since 2003, but this was my first encounter with their material since discovering Simple ExistenZ.
The first thing to make note of on this recording is the more raw production style that this record has, it's a bit rawer then what I usually like, but it still works in the context of what the duo are trying to accomplish. For those that don't know what that is though, it's atmospheric black metal, and it done in a Xasthur meets Enslaved kind of way, thus, you get raw, distorted production that covers up more spacey keyboards and interesting riffs. Thus the production, in my opinion, gets in the way of the music's stranger performances.
I say the production does injustice to the music that's playing because, for those that have listened to Nagelfar and Simple ExistenZ, the riffs that are played are certainly more interesting than simple tremolo picking, even though that's on here too. The riffs are more abstract, as is the entire musical backbone of the entire album, hear the dark ballad Der Ausfall. The musical side of this album ranges from standard black metal to abstract ambient to even demented show tunes-esque parts, this is mainly thanks to the piano used throughout the album. The demented breaks that come in during these songs are really odd, the breakdowns using acoustic guitars or those demented piano parts mentioned above really don't' make this album seem all that friendly or normal.
Besides the production, which, even though I dislike, it is manageable, the vocals are the only other problem I have with this thing. First off, it's very hard to tell what they're saying or what language, I'm assuming it's German, but I could be wrong, simply because the vocals are buried pretty far in the mix. The additional fact that there are a few songs where the vocals also appear to be distorted does help making them understandable any more either.
Overall, this is a good album with some bad production choices. I think a bit slicker, or less distorted production next time would do worlds of benefit for this band. If you like atmospheric, ambient, or old-school black metal, definitely check this out.
Overall Score: 8
Highlights: Die Kinder Saturns, Klangloser Tod, Wolf Again
Posted by maskofgojira at 3:52 PM