Star One - Victims of The Modern Age 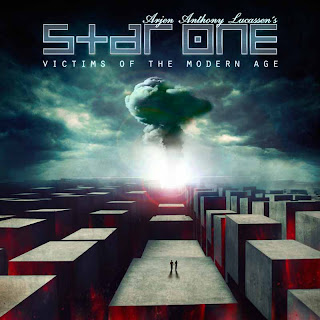 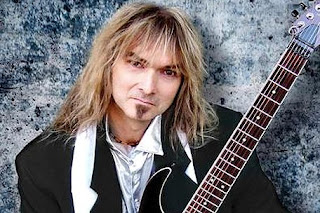 They Called Him A Space Man, Well He's Come Back Home.

Star One is the progressive metal project of progressive master Arjen Anthony Lucassen, of Ayreaon fame. This is his second full-length under this project, after having released a highly acclaimed debut, 2002's "Space Metal." After having released a softer, more atmospheric record last year, his project Guilt Machine, he decided it was time to get heavy again.
As many who are aware of Lucassen's past work, and various other projects, this record is most definitely his heaviest yet, even living up to the heavy sound of the debut's sound. Lucassen himself had stated that after the quieter and more ambient sound of Guilt Machine he wanted to just write some heavy, balls-out metal stuff, thus, Star One's second album has finally come out, and not without a few surprises. This record makes use of more guitars than even the debut, which had a pretty equal focus between guitars and keyboards, but this record can safely be called a heavy, guitar album while still containing Lucassen's trademark use of 60s and 70s mellotrons and Hammond organs.
Onto the vocalists, with every project Lucassen has ever created he was always made use of a wide variety of singers from various styles of music. While fans of that may be disappointed somewhat by the lack of new vocalists on here, the four returning vocalists are some of the best out there and are on here for their outstanding work on not only the debut record, but in their own bands as well. The four vocalists, for those that don't know, are Damien Wilson (Threshold), Floor Jansen (ex-After Forever, ReVamp), Dan Swanö (Edge of Sanity, Nightingale), and Russell Allen (Symphony X), all very talented and unique sounding singers, each providing their own sound to these songs. As a bonus, for me at least, the one thing I was disappointed by on the debut was the lack of singing from Swanö, a problem which has been immediately corrected, by his vocals being the first to appear on here, Digital Rain.
For those that have never heard a record that Lucassen has created, you are sorely missing out as this is some of the best and most original progressive music to have been released in the last two decades. But focusing specifically on this record, like every other one he's done, this record, while being progressive, there is plenty of room for hooks and catchy melodies, hear tracks like the title-track, Victim of The Modern Age, or Cassandra Complex. In the case of this album being progressive, it's not in the sense of being overly technical or having multiple solos, they're in here though, but more in the case of having a song take priority over having ambitious playing and solos. There is also a tendency, due to his background in the scene, have some parts, especially the chorus of the latter track mentioned above, sound very poppy and 80's metal-esque.
Overall, I can say with certainty that this is one of Arjen's best works yet and definitely lives up to it's predecessor, if not tops it. Once again, this is a heavier record, a lot more distorted guitar riffs while still maintaining that signature synthe sound throughout. If you like progressive music, this should be the next record you check out for sure.
Overall Score: 8.5
Highlights: Digital Rain, 24 Hours, It All Ends Here
Posted by maskofgojira at 10:21 AM