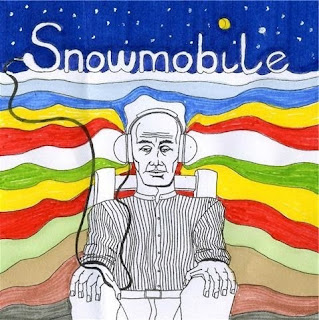 Snowmobile is a post-rock/ambient project by UK producer Francis Allen. This project has been developing for several years taking on a more and more post-rock sound in the vein of groups like Sigur Ros. This is the third full-length record to be released by this project.
This record, right off the bat, seems to take a much more post-rock oriented approach towards sound, as oppose to the last two record's most ambient soundscapes with guitar noodling. Tracks on here have more winding guitar melodies instead of open ambient soundscapes, which end up doing similar things in creating an open atmospheres anyway, but to make it clearer, this is a more guitar oriented album. That's not to say however that there aren't keyboard atmospheres on here though, they take just as big a role in creating atmosphere as ever, they're just not the dominant instrument on this record.
This album is perhaps a bit more accessible due to the happier melodies that wander around it's entirety. I found tracks like Hoverboard to have a nice groove that would be easy for people to dance around to, which is totally different to how I found earlier material by this project to be. But for those that don't want that in their post-rock music, there are still more low-key and ambient tracks that are just perfect to chill out to, This Sorry State.
Personally, I prefer the more laid back tracks that just lend themselves to getting spaced out. These tracks just feel much more full, and in my opinion, are much more enjoyable, especially to those that liked Snowmobile's first two albums. Tracks like the title-track, Strangers, and Happy Where You Are have an almost new wave kind of vibe, which may not be what a lot of people are looking for with Snowmobile, but it is still pretty cool.
Overall, I didn't find this as engaging a record as the previous one was, but this had several good moments. This is definitely not my favorite post-rock/ambient record this year by far, but once again, it is decent. If you like the genres listed above, or are just looking for something pretty atmospheric as a change of pace, definitely check this out.
Overall Score: 6.5
Highlights: You, Strangers, Amnesiattack
Posted by maskofgojira at 2:15 AM