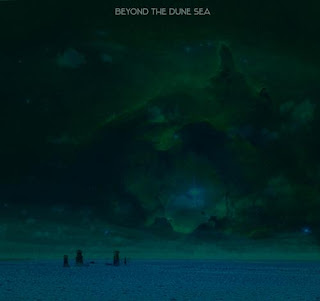 Glide Across Songs And Beyond.

Beyond The Dune Sea is a post-rock trio from Canada. This debut full-length is their first recording and features several improvisations that have been recorded as oppose to songs. The band state that they are without boundaries, willing to explore all realms of music.
First off, while this is labeled as a full-length album, all ten songs on here add up to less then thirty minutes. I'm not quite sure if you could consider this as a full-length record just based on that, but there have been shorter records from other groups that decide to label a fifteen minute album a full-length, so I guess it doesn't ultimately affect the listen as much as the money you pay for it, if you pay at all that is. But onto the music, it is what the label described it, post-rock, it's not straying too far away from that sound, though there are some tricks here and there to that do keep things interesting. Not much on here is heavy, things are very laid-back and relaxing at some points.
I'd say that one of the most interesting things on this record would have to be the drumming. The drummer on here really just plays a lot more energetically than the other two members of the band on guitars and bass. In just the opening song, The Dune Sea, the drums go into some really pounding parts while the guitars just slowly cradle the sound. I also found the fills and jazzy bass lines in Time Is of The Essence to also be a bit surprising as well. But with the occasional surprises, there also comes a bad, the guitars don't really pop out as something all that interesting in here; also, the electronics that pop up in certain songs also prove to break up the flow to a song which proved a bit irritating.
Overall, this album didn't really have a whole lot that interested me, I often found myself losing focus during these songs. The fact that these tracks were improvised kind of makes these tracks feel like the just wander without any direction at all which proves tiring after the first few songs. If you like improvised music, post-rock, or electronic influenced rock check this out, otherwise there won't be a lot here for you.
Overall Score: 5
Highlights: The Red Tide, Embryo, Final Solution
Posted by maskofgojira at 6:23 AM