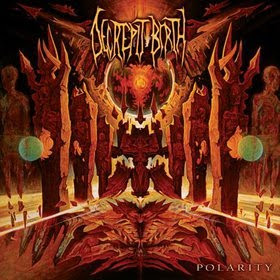 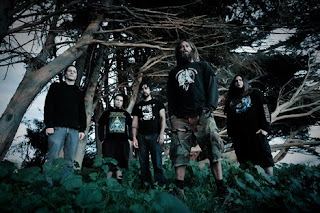 Decrepit Birth is a technical death metal band from California. Formed back in 2001, the band have gone through numerous members, some more known then others, but this album has proved to be what many hoped it would be in spite of a non-consistent line-up. This is another album that I have only recently decided to listen to due to laziness.
Decrepit Birth are a band that have grown with each and every album they have released, from their beginnings as a more brutal death metal group, 2003's "...And Time Begins," to adding more melodic and progressive elements into 2008's "Diminishing Between Worlds." This album has more in common with the latter album but manages to improve upon that by moving into "Symbolic"-era Death territory. Thus Decrepit Birth are probably the band most similar to that of the legendary metal band since their, mainly Chuck Schuldiner, untimely demise.
This album really opens with a hard song to follow, the six minute (A Departure of The Sun) Ignite The Tesla Coil, a track with more than a few ups-and-downs throughout it's course. This one track could indeed be the band's masterwork up to this point, easily being their most progressive song, though the entire album is very much in a similar vein, there's just something special about this song that makes it stand out above all the other tracks. This, for me is the epitome of the entire album, but that's just me. As for the rest of the album however, it stands just as tall, maintaining the same intensity from start to finish while managing to make every track sound different.
I have to say that all the solos on this album are phenomenal, each one blowing my mind. Having from one to multiple solos in a single song is not a bad thing when a band like this is the one playing them, though songs like the title-track, Polarity, or The Quickening of Time stand out the most for their solos, every one of them is great. Each solo bringing either thrash shredding, melodic lines, or progressive sweeps all just seemed to capture my imagination. If there was one track that really summed up the solos on this album it would have to be the instrumental Sea of Memories.
Overall, this is another fantastic death metal album from this year and again, an album I'm sorry for not listening to earlier. This album definitely captures technical and melodic elements in a way that, in my opinion at least, only Chuck Schuldiner could. If you like death metal in any variety, then check this out if you haven't already.
Overall Score: 8.5
Highlights: (A Departure of The Sun) Ignite The Tesla Coil, Solar Impulse, Symbiosis
Posted by maskofgojira at 10:15 PM