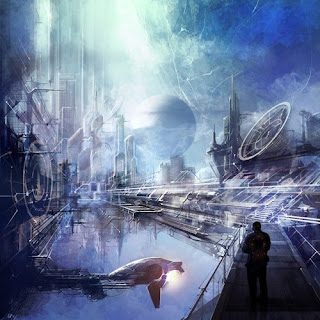 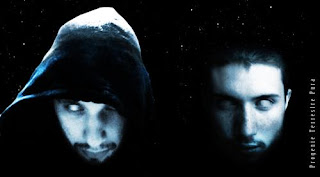 Back in 2011 I reviewed a little two song EP/demo from Progenie Terrestre Pura and actually really enjoyed it. Since then I've been rather unaware of what the duo was actually doing, though I had hoped that they would release more material, I was not sure. It wasn't until I got an email a couple of weeks back telling me about this album and asking me to review that I even remembered the band.
Based on the album artwork and from what I remembered from that initial demo/promo EP(...) I kind of had an imagined sound for what I thought this album would sound like. Upon first listen I was actually struck by the fact that my assumptions were pretty close to the mark, but that the entire album had a much different structural tone to it than I expected. Sonically, what I had imagined was a very atmospheric sounding black metal record that would have this sort of polished sound due to either tons of synth tones being used or simply through a more industrial vision from the band, and, more or less, that's the sound that is on here. It's very cold and synthetic sounding, with introductory vocals being delivered by whisper through a filter and some more moody guitar chords before bursting out into a more traditional sounding black metal riff. That's just the opening title-ish-track. The following track, Sovrarobotizzazione, which I would actually rank as one of the best songs I've heard all year, takes several influences and does some really wondrous stuff. In just referencing the guitar work in this track, there's your typicacl black metal tremolo picking, but you also have some very modern progressive stuff as well, including a surprising djent-ish groove section that really took me by surprise when it came up.
Now, what I meant when I said that this album had a different structural tone to it was that throughout the five tracks that make up this album, what you have are not simply five atmospherically based black metal tracks. There's a lot on here that has nothing to do with black metal. The influence of space ambient, 70s synth odysseys, space rock, and minimal electronica can be heard throughout this album. Whether it's through the articulate solos that occur, the straight-up ambient pieces, the more "futuristic" electronica elements that pop up in the background of certain tracks. It's a really interesting fusion of ideas and when I say structural tone, I meant that the entire album was not based around a black metal sound but actually more of an ambient one. So in that sense you're getting a record that is closer to the likes of Trist (the German one) or Paysage d'Hiver if you view it in more of a black metal sense. While I listened to it, I got vibes from Pantha Du Prince, Brian Eno, Tangerine Dream, and Nektar (among others) which are far from being metal in any way. It's actually really interesting because, despite the influx of progressive rock and krautrock influence into extreme metal recently, as well as the long lasting influence of ambient music, I have not heard a record quite like this one before.
I'm actually quite surprised by how consistent this album is based on how varied it is stylistically without every falling into the self-indulgence realm of most avant-garde and progressive music (which I love). There haven't been that many bands who I've heard who can begin a record with an aggressive metal track, expand upon it, and then apparently abandon it for what sounds like a complete reinvention of their sound. It's a very odd thing this band does on here because the non-metal tracks definitely have spots where it's clear the band are tipping their caps to 70s and 80s progressive and electronic music, but they manage to do it in a way that never sounds like they're directly ripping off anyone. In fact, most of it still manages to come across in a way that I would have never thought of. The album's centerpiece, La Terra Rossa Di Marte, is the clearest representation of such. It's an ambient odyssey of sorts with a guitar solo that is taken directly from the space rock playbook. But boy oh boy does it sound different, because the album's production has such an industrial and cold tone, it doesn't give off the same vibe that either a vintage band would or a band who just took on board space rock as an influence.
I think this is a really interesting record and I'm glad that it's receiving the warm reaction that it has. There aren't many other records out there that sound like this one and that has crossed over so well into other genres. If you're a fan of experimental metal, electronica, ambient, or rock (I'm being broad - I know, get over it) than give this record a shot, hopefully it'll work for you as it has worked for me and many others.
Overall Score: 9
Highlights: Sovarobotizzazione, Sinapsi Divelte
Posted by maskofgojira at 3:51 PM