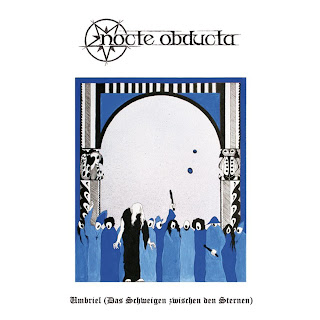 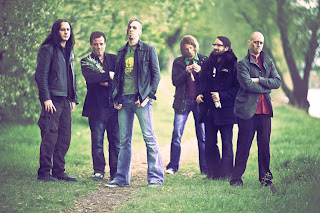 As I stated in my review for 2011's Verderbnis - Der Schnitter Kratzt An Jeder Tür, Nocte Obducta is one of my favorite German bands - and one of my favorite black metal (based) bands. They're just one of those bands who are consistently interesting and always grab me whenever they put out a new album. I was looking forward to this album ever since I first heard about it last year (which is when I thought it was supposed to come out) and when I first found it, it was one of those albums I listened to immediately.
While I have yet to be disappointed by this band, I have to say that I was glad when I saw that this album happened to feature some longer tracks after the more direct approach of their last album. With that being said though, I in no way expected what this album would bring to the table sonically; but whether that was a good or bad thing I'm still not quite so sure. The first time I put this on, it was certainly a surprise. The Opeth-esque introduction of Kerkerwelten - Teil 1 really threw me for a bit of a loop, but I thought that the band actually did a good job at playing that sort of style (whether intention or not). It's a very moody introduction that has a short burst of post-metal as a centerpiece, but is otherwise a more reserved introduction. While I could live with that as an introduction, the rest of the album threw me curve-ball after curve-ball, and I never knew where I was being taken next. The rest of the album never really breaks out into aggression like previous releases have and is quite restrained in comparison, which leads to a much more progressive rock sort of sound. For those that heard the Dinner Auf Uranos record, 50 Sommer - 50 Winter, back in 2010, that record could be seen as a sort of precursor to this album. That might be a bit obvious seeing as two of the tracks on here are actually named after that project from a couple of the members from the band, but it was still surprising to hear the band strip away that black metal foundation for most of these tracks and deliver a more atmospheric and progressive rock based album. It has it's more metallic moments for sure, but like I just said, it's far less abrasive than on almost any of their past recordings.
With the much calmer style found on this record, you'd be correct in assuming that there will be a much strong instrumental sound on here. That progressive rock sound that band has taken on board for this record - which isn't a new style inclusion, but rather a different presentation of the influences is how I'm viewing it - leads to some rather interesting sections that bring to mind everything from krautrock to smoothe jazz. The extended synth piece that makes up a good portion of the aforementioned Dinner Auf Uranos track will probably throw off several listener expecting some more rock/metal based parts to make up a lengthier piece on here, but is actually quite an interesting move. Personally, these more extended atmospheric sections show a side of the band that I would have not expected to hear. While the band are no strangers to calmer and more atmospherically led passages, this section in particular struck with since it was based in soundscapes that sounded like they'd be from the 70s. The more trippy and post-rock-esque Leere will more than likely be an easier pill to swallow for some because even though it is pretty mellow for most of it's fourteen minute running time, it still keeps a foundation that is quite common in many post-rock bands.
With all that being said, there are still some more rocking tracks for fans who prefer the heavier side of the band. Tracks like Gottverreckte Finsternis and Mehr Hass are more direct pieces that definitely appeal to that more metallic sensibility from the band's last record and do recall a bit of the post-punk vibe going on from that album as well. Granted, these are two out of nine tracks, where two-thirds do not retain this same level of "heaviness." I will say that because of how restrained the rest of the album is, the tracks that are heavier do sound noticeably so if that makes any difference to people. Also, I know the clean vocals are sort of similar to that of Rammstein's, but I never found that to be a stumbling block so I can't see others doing so either - but it's there for people to criticize if they like.
Personally, while I can't say this is my favorite record from the band, as far as evolution goes for them, I think it is a step forward. It's not a record that will appeal to everyone, and I think older fans might even have a little trouble with this one, but it is a good record. An interesting shift but it will be even more so to see where the band go from here.
Overall Score: 8
Highlights: Dinner Auf Uranos, Ein Nachmittag Mit Edgar, Kerkerwelten - Teil 2
Posted by maskofgojira at 11:03 AM