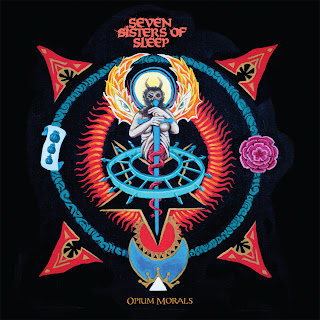 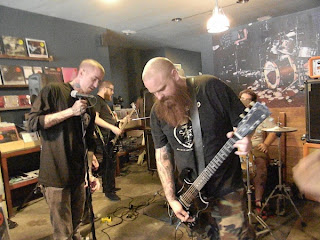 I first heard of the band called Seven Sisters of Sleep back in 2011 when they released their debut self-titled EP. That short little burst of hardcore punk/metallic hardcore was more than enough to keep me interested in the band. Since then they've released a couple other small releases as well (that I haven't covered) but their first full-length(...) was well worth covering for sure.
It's sort of strange how the memory plays tricks on a person. For the longest time I had always remembered Seven Sisters of Sleep as a metallic hardcore group, but when I went back and listened to that debut EP again recently, it really didn't come across as I initially remembered it. The bluesy riffs and the more mid-paced tempo surprised me on that. But listening back to that release and the SSoS EP from last year, it makes sense how the band progressed more into the sound found on this album. Actually when listening to this album for the first time I was curious why the band was pursuing that slower sound more - not that I'm complaining. Now it makes sense to me. But back to the matter at hand, this full-length from the band. What we have is the band pursuing more of that sludge direction but still managing to bring in a couple of new ideas to the table. After all, how many times have we all heard a sludge metal band do some more punky stuff or a hardcore band move into slower, more downtrodden territory - this isn't new, but when a band does it well, you can just feel it. Maybe I'm biased because I already know I like the band, but I think Seven Sisters of Sleep does both with aplomb.
This record has some very crusty hardcore parts that are balanced with the weight and heft from their slower sludge parts. That's not the surprising part though. What hit me the most on here was the almost death-doom influences that pop up occasionally on here. Opener Ghost Plains is a great example of the band showcasing more of that sort of a sound that I don't recall hearing from them before. The majority of bands in this style tend to stick with a similar sounding vocal style, and this band is no exception. The main vocal style is that sort of throaty shout/yell/roar that really does hit me as being one of the more authentic forms of extreme vocalizations in metal music (and other harsher genres of music), but it's always nice to hear some variety as well. During some of those low-doom parts on here it was a nice change of pace to hear the vocalist go down with the band into some rather brutal death growls. Obviously, this sort of shift isn't going to blow anyone's minds, but it works with the shift in tone between the crushing doom and either the bluesy sludge or audacious hardcore punk. I think it's also worth mentioning that for a band that isn't primarily based within the doom genre, the tone these guys wield is one of the heaviest I've heard is quite a while.
Regardless of what other bands do within this/these genres, I feel like these guys are still one of the best out there right now when it comes to newer groups. I hope these guys keep pursuing new territory without abandoning their original sonic roots because from the sounds of this album, they could really do some cool stuff. I look forward to more new material in the future!
Overall Score: 8
Highlights: Moths, Sunday Mass Grave, White Braid
Posted by maskofgojira at 10:14 AM