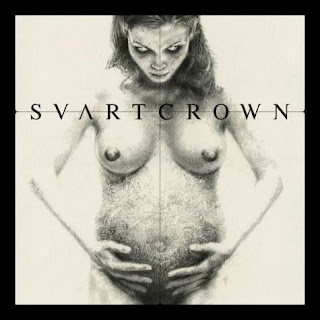 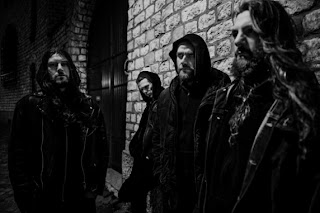 Back in 2010 when I first heard Svart Crown's album Witnessing The Fall I knew I was listening to something special. Though the whole blackened death metal genre isn't exactly my favorite, I gave that album a chance and it definitely proved to be one of the best album's I heard from that genre. I was certainly pumped up once I heard that they were putting out this new album and knew I had to hear it.
There's something to be said for knowing how to write a good riff. As I've mentioned before, the ability to write riffs is something that I see as lacking in the black metal genre (for the most part), but is still pretty well done in key death metal bands. Svart Crown have that talent down to a T and demonstrate it throughout this album as they did on their last. They blend the two styles in a way that to me has always come across as the right blend of atmosphere from black metal and all the riffing and intensity from death metal with some nice bits of sludge thrown in every now and then for good measure. They don't make their albums feel like a chore to listen to - which, I have to say, is something many albums in either genre could very well become if they don't do anything worth while. I could play their previous album on almost any occasion simply because they knew how to write good songs and riffs, they could captivate me when they were more moody, and they could prove to annoy other drivers on the road if I decided to play them with my window open while driving (which is something I love to do - annoy other drivers I mean). They had it all on their previous album, and it has transferred over to this new album as well.
After a nice intro track, Manifestatio Symptoms, they just go right for the jugular with Genesis Architect. This is the sort of track that I just love to hear open an album (or at least be the first real song on an album) because it's just aggressive and up-tempo while having a nice and dark ambiance to it. Plus I'm a sucker for a dissonant riff like the one used in this track. And frankly, this is just one track with eight more following that are just as good. There is at least one good riff in every song on here that made me want to headbang (which is something that I increasingly find myself uninterested in) - so I definitely don't take that lightly. Or in other words, I almost never headbang - but I did headbang to this. In addition to that, despite this album being primarily aggressive from start to finish with very few moments where a listener can catch their breath the band still manage to build up intensity in some of these songs. I was surprised during In Utero: A Place of Hatred and Threat when the band just began to go berserk during its closing moments. Then you have the title-track which is one of the few times the band actually softens their approach (so to speak) and actually relax the intensity just a bit in the ladder half of the track, yet manage to make it feel even more intense than the first half. I could really go on and on because there isn't a bad egg on here, every track is great and worth hearing.
I seriously hope these guys get bigger because they are putting out some of the most consistently good death metal (blackened death metal) I've heard in a long while. This is one of the best death metal records I've heard in a while and I don't see me growing tired of it any time soon. Definitely recommend for any fan of death metal or whatever the definition for "brutal and intense" music is nowadays. It's awesome, what more do you need to hear.
Overall Score: 9
Highlights: Genesis Architect, Until The Last Breath, Revelation: Down Here Stillborn
Posted by maskofgojira at 12:26 PM