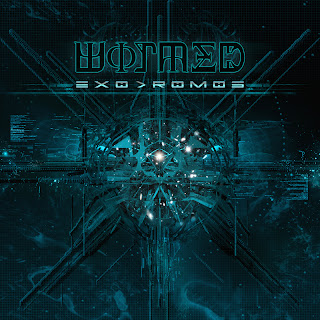 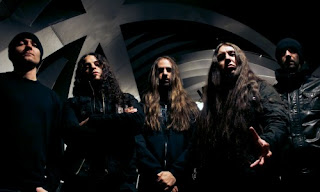 As I have stated many times in the past, brutal death metal is not a genre I find much to enjoy in (for better of worse) and thus find only the occasional band to inspired me to write about them. Wormed was one of the very few groups from the whole "brutal" scene that really grabbed me when I first started diving into it (though to be honest it took me quite some time before I actually listened to their entire debut full-length). Having been developing this second full-length for somewhere around the five-to-ten year mark at this point I definitely paid attention to this release.
The fact that these guys are called cosmic death metal (or something to that regard) is something that I have quite a hard time buying into. Not that I'm trying to knock every brutal or technical death metal band out there, but when most of them come out sounding essentially like cookie cutter versions of each other it's hard for me to believe that about a band from these scenes. Luckily enough for Wormed, after actually listening to this album I can buy into it a bit more. When it comes to actually writing songs, these guys definitely have both the brutal and the technicality down pat, but I think what draws me to them is that they actually know how to write a song. So many times with these bands it's all about how brutal your slams and breakdowns are or how many notes you can play in five seconds or whatever, I'm surprised when a band like Wormed who are classified under both genres can actually manage to make a song memorable. Riffs remained with me long after the album had finished and the entire album definitely leaves a mark once it reaches it's end.
Frankly, vocally, there are very few groups who can even engage me with the guttural gurgles, there are even fewer who can make me continue listening once they start pig squealing. I'm not trying to kiss this bands ass or anything but the fact that they were able to keep me engaged and interested once they started using that style of vocals is a testament to how well they can write songs. It also didn't hurt their case that they didn't dwell in those vocals for long periods of time. Phlegeton - I give you a thumbs up and will say you have convinced me where many have failed (if that means anything). Back to the instrumental side of the band, obviously they dwell within the death metal spectrum of the extreme metal genres, but while listening there are all these riffs coming in that sound like they're coming from black metal, from industrial music, some more grindcore/mathgrind at times as well, but it never appeared to all come from a single place. There were parts that were brutal, parts that were technical (for reiterations sake), but more surprisingly parts that were chaotic, melodic, groovy, and atmospheric. Since when did a band from this side of extreme metal know how to write using various styles in ways that I haven't heard yet. I'm beginning to think that if more labels let their bands take extended periods absence like these guys took, maybe we'd get some albums that actually challenge the genre and listeners. More power to these guys for taking so long writing and recording this because it certainly paid off.
This was a real surprise for me. I came into this album not knowing if I would even like it but listen after listen I was constantly being surprised and impressed, hearing a riff I didn't hear before, a vocal gurgle that I didn't notice the last time, and so on and so forth in that way. In terms of death metal this year, this is definitely the highlight so far - hopefully many people will go out and listen to this because I have a hard time believing any other band is going to be able to craft a better "death metal" album this year.
Overall Score: 9
Highlights: Tautochrone, Spacetime Ekleipsis Vorticity, Techkinox Wormhole
Posted by maskofgojira at 11:32 AM