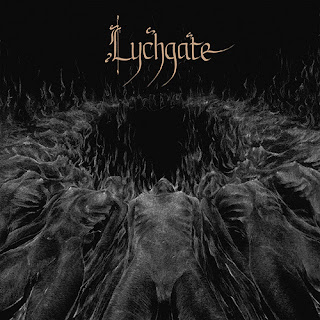 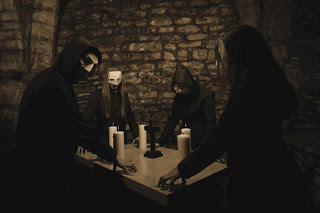 I don't think my adoration for this band needs to really be stated seeing who is involved. Featuring members of Esoteric (one of the best funeral doom acts out there), Lunar Aurora (one of my favorite black metal bands - period.), and Omega Centauri (a great up and coming group), as well as The One (which is pretty solid), I knew this would be good. So when I received this album it pretty much just jumped up to the top of my "must review as soon as possible" list.
I remember the press release for this album telling me it was going to be a black metal album, which I would have gathered right away after listening to this album, but it did tell me that it wasn't going to be in the Esoteric vein of things. But this certainly wasn't the sort of black metal that I think I was expecting to hear, though based on who's in the band I really should have anticipated this being a bit left of normality. There are definite traces of each of the four member's original groups in here. The songs aren't blasting for the most part, the riffing is slightly off-kilter sounding, and the atmosphere is just noxious throughout. I remember hearing Resentment for the first time and just feeling like I couldn't even navigate through the track because the atmosphere was just so powerful. The riffs certainly have their surges of tremolo picked, high velocity moments on here, but the majority of it is more mid-tempo stuff that just has that huge Esoteric-like weight and atmosphere to it. There's all this reverb on these guitars that literally made me take a step back when I realized it. In addition to that, despite the riffs being a bit more "different" (I don't feel like I could call them abstract in this case) the tone on this record is still pretty melodic, with melodies that are quite easy to recall long after the album has finished.
If you haven't already guessed it, I really dig this album. I think the only problem I really have with it is how short it is. This entire album is under forty minutes and after listening to a bunch of albums recently that are too long, it sucks to find a really good one that I think is too short. With the exception of the intro and interlude (of which I have no problems with) there are only seven real tracks on here and they're all pretty damn good. Even the short burst of fire that is In Self Ruin is a great piece of work because it doesn't wallow in how straightforward it is in it's aggression. It also comes in at a nice point in the album, it isn't too late in to show the band can just bust out an intense rager, but not early enough to come across like just another black metal band. I could go into detail about almost every track on here, because they're all something great, though I do find myself coming back to the likes of Sceptre to Control The World and Dust of A Gun Barrel more than any other track on here. There's just something about those two tracks that draws me back over and over. Frankly, they aren't the most memorable tracks on the album, but there's just this quality to them that remains with me more than any other track.
So, overall, I really dug this album and I think if you like black metal in some shape or form you'll like it as well. This isn't an album that really tries to be experimental or unique but still manages to cross a wide amount of territory in each of it's tracks. There's something in here for every fan of the genre and I can't say enough good things about it.
Overall Score: 9
Highlights: Against The Paradoxical Guild, Sceptre to Control The World, Dust of A Gun Barrel
Posted by maskofgojira at 11:11 AM