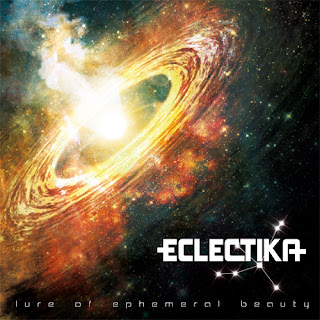 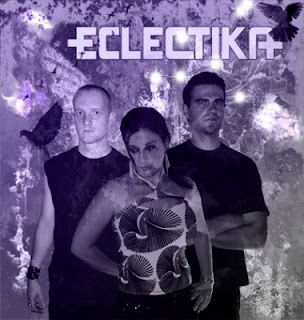 I gave Eclectika's 2010 album Dazzling Dawn a review on this blog way back when I was first starting to get a handle on what I was doing here. I wasn't quite as blown away by that album as I wanted to be so I was surprised when I actually received an email asking for me to review this album. Normally I wouldn't cover an album from last year so late into this one, but I was curious on how this new one sounded so I said sure.
I'll just get it out of the way so you can get on with your day, this album really did not live up to my expectations (those minimal expectations I hope an album will be good at the very least. There's certainly something to be said for a band having their own voice, but whereas on the band's previous full-length, I felt as though they were struggling to find that voice, on here, I will admit that that voice is very clear, it's the wrong voice for my tastes. Sonically this album tries to find a balance between black metal, ambient music, and symphonic music (or at least that's what I got). There are some additional flairs in here as well, but man oh man does this album sound fake. The instrumentals sound so flat and digital it's not even funny. The drums are obviously programmed, but this is some of the most lifeless programmed drumming I've ever heard. It's just your basic beats with the occasional burst into double-bass territory but with absolutely terrible drum tones. In addition to that, the bass and guitar tones really aren't anything to be proud of either. I could deal with the weak (or fragile to be honest) guitar tone if it was at least doing anything interesting; and the bass really has no business being as loud as it is in the mix for the wobbly tone that it's accompanied with. While the higher notes come through just fine, the low end, which, generally speaking, is what the bass is used for, is just bad. Not the way it's being played, but the sound. So yeah, we're not off to a great start here.
But beyond that, the biggest element I struggled with while listening to this album was most definitely Noémie Sirandre's vocals. I said in my review for the band's last album that she sounded a lot like Sarah Jezebel Deva on those early Cradle of Filth records - you know the ones. Her voice is very operatic and, frankly, the reason I don't listen to a lot of female fronted power/prog/symphonic metal groups is because they all have this same method of singing. It's not bad, and they are clearly talented, but that style of singing just really irritates me to no end. That is no exception on here. Her vocals are littered all over this record, she is pretty much the main voice of the band for this record, and I would be lying if I said there weren't times when I just wanted to turn this album off because it was just getting so annoying and I was just getting aggravated. The aggressive vocals on the other hand I have no problems with. They're not individualistic in any way, but they're just fine and do what they're intended to do.
In terms of ideas, this album isn't bad. Frankly it sounds like the trio were trying to fuse symphonic music with a more atmospheric black metal type of vibe in a unique way, and I think that the ideas are there. There are some nice industrial flairs here and there as well as some nice guitar and bass parts - but they're bogged down by the terrible production sounds. The instrumental synth tracks are ok, quite frankly I don't think they improve upon the album, but they don't take away from it either. The trio has always used them and I don't find the ones on here to be any better or worse than the ones on previous albums.
So, overall, I can say that I really did not care for this album. The production, tones, and female vocals just ruined it for me. Obviously this is all just my opinion, so if you are still interested in this, definitely check the band out, but man was I disappointed by this album.
Overall Score: 4
Highlights: Cyclic Anagnorisis, Room Nineteen, Handicapped Sex In A Mental Orgy
Posted by maskofgojira at 10:56 AM