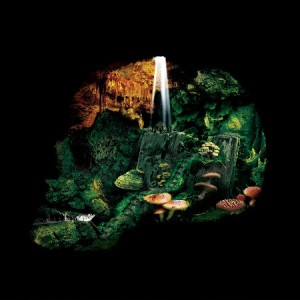 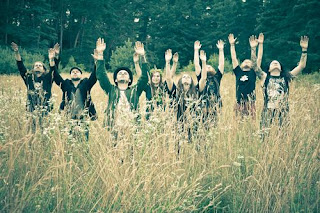 I've been a big supporter of Kvohst's work for the last couple of years, both of his work in Hexvessel and of his former black metal bands. Since Hexvessel first started, I have yet to be disappointed by the band's brand of occult based folk music. I have to say that I am rather surprised by the band's pretty consistent output thus far, I mean releasing a release once a year by that.
This little five song EP is a nice little stopgap between last year's amazing No Holier Temple and hopefully another full-length to be released. That album really showed the band filling out their sound and branching off a bit more. Not so much a 60's inflected occult folk project from Kvohst, but a full band working within and beyond that genre, the band took a step by becoming more adventurous with song structures and incorporating even more varied instrumentation. This album moves into a slightly more electric direction than even the last full-length did, but also continues with interesting song ideas. Opener Masks of The Universe is a very well constructed epic that definitely makes good use of each second of its time. It feels much more like a psyche-rock jam than anything else the band has done to this point. Later on, Woman of Salem is easily the band's most catchy song to date, with a big, infectious chorus that is easy to get stuck in your head. But really, those are just the two tracks I find myself returning to the most, the entire EP is a killer - like everything this band releases. This is the sort of release that is perfectly suited to being an EP, you have individual songs which sound like different ideas that band wanted to try, from the opening epic to the melancholy ballad of Superstitious Currents to the aforementioned single and the two more psychedelic rock tracks that build up and down better than most post-rock bands do. It's great, what more do you need to hear.
I don't think it's coming as any surprise that I really liked this album. Kvohst has yet to disappoint me with anything he's participated on and this has proven to be his most consistent project to date. I certainly dig retro bands, but this is one of the few who seem to actually do with not only conviction but also manage to make it more than just an homage to this time period. Support this band if you have yet to!
Overall Score: 8
Highlights: Masks of The Universe, Woman of Salem
Posted by maskofgojira at 3:28 PM