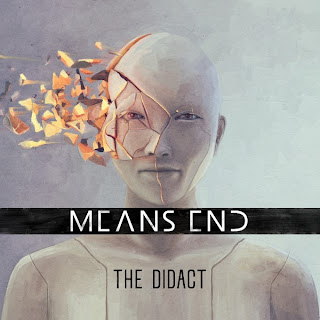 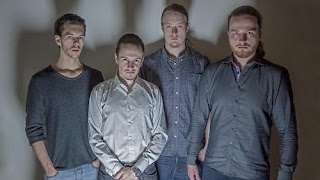 Means End has been a band who I've been periodically keeping tabs on since first hearing about them a few years ago. Since they happened to feature Robert Luciani, who used to sing in Vildhjarta, they were a group I wanted to know. It's been a couple of years since first hearing them, but they have finally released their debut full-length and boy was I going to get on top of it as soon as I could.
I don't expect people to know this but I'm a big fan of Vildhjarta. I think that what they are doing with djent is really something special and the two songs they released with Luciani on their Omnislash EP are among their most popular. Since his departure I would argue that the band has taken a much more abstract and dark path (though I have no way to back this theory up), but it's interesting to hear where the two sides have gone. If Vildhjarta is a dark and dissonant group, than the path that Luciani has made for himself with Means End is the opposite, featuring a much brighter, melodic, and at times theatrical tone to it. Having only the band's self-titled EP to go off of, I was actually somewhat shocked with the way this album sounded. It's not as densely layered, or at least not as obvious about it, and Luciani's vocal performance is far more diverse and operatic in tone. I don't think it's any stretch to say that his vocals are the highlight of the album. He just goes up and down on here from operatic and theatrical cleans to more straightforward melodic singing but still bringing in plenty of aggression from the death growls and his ear-piercing shrieks. He really is a force to be reckoned with behind the mic - though at times I did feel like he might have been stretching his voice, hear the chorus of Arbiter of Time for an example.
Musically, this album definitely took a turn that I didn't quite expect either. As I mentioned above, the tone is pretty light and melodic sounding for the most part. There isn't a massive amount of pounding low-end on here, with more of a mid-rangy guitar tone for the most part, which was the biggest surprise for me because for a band that did come, essentially, from the djent genre, it didn't have that crushing low-end that most groups have. But aside from some more groove based riffs, there isn't much djenting actually going on here. Even the grooves themselves aren't overpowering or all that close to what many groups in the genre are doing to be honest. One of the darkest and heaviest moments you'll hear are on a track like Aeronaut, which is actually one of the quieter tracks on the album - but there are others for those curious. There's a bigger embrace of chordal melodies and I guess what could be called traditional progressive riffs, which I thought was a nice route for the band to take. Then there's the entire background of the album which is just filled with synth textures filling up the empty space. Whether it's simply through piano keys or more ambient soundscapes, there's always something going on back there.
But I have to say that there was one track on here that did annoy me. The band's cover of Nox Aurumque, by a composer named Eric Whitacre, did come off as somewhat pretentious to me. I'm sorry if maybe I just don't get it or something but I just couldn't find myself enjoying the track in the same way that I did for the other eleven tracks on here. It's not a bad song, it's not performed badly or anything, but just the way it was presented by Luciani, who can no doubt perform it, where is just sounds so over the top that it just sounded like a band doing it just because they thought they could do. I know that sounds incredibly stupid, but for me it was the equivalent to someone wanting to have their cake and eat it too, they wanted to cover it but instead of making it sound unique, it just sounded pretentious and obnoxious. Just my opinion though.
Call me biased for enjoying this album, but I think that this probably has a much broader appeal than some people would make it out to be. I'm not going to lie, some of this could come off as a bit pretentious or not heavy enough or whatever, but I dug it. I can only hope that those of you who check this out find something to enjoy as well.
Overall Score: 8.5
Highlights: Crimson Interloper, Mourning Star, Sun Wukong
Posted by maskofgojira at 2:08 PM