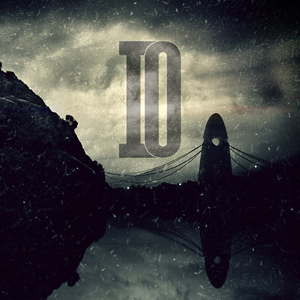 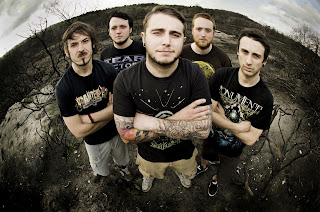 I was not a huge fan of No Consequence's debut full-length In The Shadow of Gods so I was not immediately about to listen to this album when it was released. It was only after giving a few tracks a listen one day at school that I actually decided that this was worth actually looking into more. I grabbed the entire thing and the end result is listed below.
What didn't appeal to me about the group's debut full-length was that it felt very much like a mish-mash of ideas that weren't totally cohesive together. The band were making use of those djenty rhythm sections, technical playing, but with a big metalcore presence holding the whole thing together, and that didn't really do much for me. I think that the major shift for me was the lessening, since I won't say it's been removed, of those metalcore elements. This album feels much more like a modern metal album in that the band feel like they're drawing from the likes of Periphery and The Safety Fire more than whatever metalcore was popular back in 2008 (I don't remember even though I was most likely a fan of it). I would also say that Kaan Tasan is a more capable and a far less annoying than the previous vocalist Phil W. His style is a lot more precise and, once again, less metalcore sounding - or whiny if that clears things up. The end result of all these changes resulted in an album that did make me want to listen to it.
I'm well aware that even with these changes, this album and band are still not going to appeal to a lot of people. It has that very tight and polished sound that can be heard on most modern records of this style, where everything could be a machine if you didn't have enough faith that the musicians could actually play this stuff. With that being said, I'm not claiming that this is a great album, what I'm simply saying is that it is an improvement over their last release. Hell, even for fans of this style of metal, it might not grab a huge amount of fans because it sounds very similar to a lot of other bands that are out now. There isn't a whole lot to distinguish it from the rest of the pack, unfortunately, and it winds up in an album that, while I think is still enjoyable, isn't very memorable or stylistically interesting. Good musicianship can only take you so far, and unfortunately I did wind up feeling like this album was lacking in good songwriting for the majority of it's running time. It was (surprise, surprise) the longer tracks that I found that the band could actually write songs, hear Bury The Debt or Sentient, that were captivating without sacrificing any of the ideas they had established on the first half of the album. In my opinion, the clear highlight of the entire disc is the track Sentient, which is by far the most melodic track on here, but it has an almost Deftones-esque vibe to it that isn't heard anywhere else on the album.
As a whole, the album is solid, not exactly game changing or anything, but it's well crafted for what it is. It isn't wholly memorable once the last track ends, but that may just be me, hopefully you have a different experience with it. If you happen to be a fan of tech metal and djent styles, than give this one a shot.
Overall Score: 6
Highlights: All That's Left, Bury The Debt, Sentient
Posted by maskofgojira at 4:27 PM